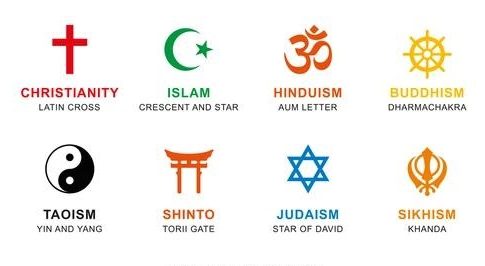 The Holy books of Hinduism — The Vedas, are the oldest Hindu scriptures. The following is a verse from the Rig Veda, the oldest of the four Vedas.

“He who gives liberally goes straight to the gods; on the high ridge of heaven, he stands exalted.”

Islam teaches monotheism, no other god except Allah as it is called in Arabic language.

Muslims believe in all prophets of Judaism and Christianity. Their devotion is shown by performing lifelong acts of worship known as the Five Pillars of Islam. These include faith, prayer, almsgiving (charity), fasting, and pilgrimage to Mecca. The crescent moon is a familiar symbol for Islam. It is related to the new moon that begins each month in the Islamic lunar calendar, which orders religious life for Muslims.

Since ritual and celebration have a significant role to play as far as Islam is concerned, at least once in their lifetime, all Muslims who are physically and financially able go on hajj, or pilgrimage, to the City of Mecca in Saudi Arabia. There, Pilgrims perform several rites, or acts of worship.

Similarly, during the sacred month known as Ramadhan, Muslims abstain from food, drink and sexual activities from dawn to sunset. Also, the 9th day of Dhul-hijjah, the last month in the Islamic lunar calendar, Muslims all over the world gather in large numbers in their various locations to celebrate the annual feast of Eid-l-Kabir / Eid-l-Adah.

The Muslims throughout the world face Kiblah/Mecca and pray to Allah five times a day. They pray in the Mosque, and the Imam, a religious leader presides over the prayer.

The major sects in Islam are Sunni and Shi’a, while the Holy Book of Islam is The Qur’an.

“And we took the children of Israel across the sea, and Fir’aun (Pharaoh) with his hosts followed them in oppression and enmity, till when drowning overtook him, he said: “I believe that none has the right to be worshipped but He (Allah)” in whom the children of Israel believe, and I am one of the Muslims (those who submit to Allah’s will),”

Now (you believe) while you refused to believe before and you were one of the evil-doers,

So, this day we shall deliver your dead body out from the sea that you may be a sign to those who come after you! And verily, many among mankind are heedless of our proofs, verses, lessons, signs, revelations, etc.”  Qur’an 10:90 — 92.

Judaism: Judaism is the religion of the more than 16 million jews throughout the world. Judaism was the first major religion to teach Monotheism. The basic laws and teachings of Judaism come from the Torah, the first five books of the Hebrew Bible. Judaism teaches that a person serves God by studying the Torah and living by its teachings.

The Orthodox Jews obey the Torah without question while Conservative and Reform Jews interpret the Torah to make its teachings relevant to today’s world. The Star of David, also known as the Shield of David, is the universal symbol of Judaism. The emblem refers to King David, who ruled the Kingdom of Israel from about 1000 — 962 B.C.

Regarding ritual and celebration, major events in a Jew’s life are marked by special rites and ceremonies. When Jewish Children reach the age of 13, they enter the adult religious community. The event is marked in the Synagogue with a ceremony called a bar mitzvah for a boy and bat mitzvah for a girl.

The Jews celebrate a number of holidays that honour their history as well as their God. They celebrate the holiday of Purim. Purim is a festival honouring the survival of the Jews who, in the fifth Century B. C., were marked for death by their Persian rulers.

Jews celebrate Purim by sending food and gifts. They also dress in Costumes and hold Carnivals and dances.

As regards worship practices, the Synagogue is the Jewish house of worship and the Centre of Jewish Community life. Services in the Synagogue are usually conducted by a rabbi, the congregation’s spiritual leader. Many jews make the pilgrimage to the Western Wall, the sacred structure, built in the second Century B. C., formed the western wall of the courtyard of the Second Temple of Jerusalem. The Romans destroyed the temple in A. D. 70.

However, Jewish men out of respect for God are not supposed to leave their head uncovered. Many Orthodox and Conservative Jews therefore, wear a skullcap known as a yarmulke, or kippah in deference to the principles of Judaism.

Meanwhile, here is a verse from the Torah, the Jewish scripture:

Confucianism Confucianism is not a religion in the traditional sense. Rather, it is an ethical system that provides direction for personal behaviour and good government. However, this ancient philosophy guides the actions and beliefs of millions of Chinese and other peoples of the East. Thus, many view it as a religion despite the fact that it has no clergy and gods to worship.

It is important to note that Confucianism is a way of life based on the teachings of the Chinese Scholar Confucius. It stresses social and civic responsibility.

Over the centuries, however, Confucianism has greatly influenced people’s spiritual beliefs as well. While East Asians declare themselves to follow any one of a number of religions, many also claim to be Confucian. The yin and yang is the symbol of Confucianism, it represents opposite forces working together in the world, and also symbolizes the social order and harmony that Confucianism stresses.

While scholars remain uncertain about Confucius’s date of birth, he lived between 551 and 479 B. C. according to legend. Thus, people throughout East Asia celebrate it on September 28. In Taiwan, it is an official holiday, known as Teacher’s Day. The holiday also pays tribute to teachers. Confucius himself was a teacher, and he believed that education was an important part of a fulfilled life.

Unfortunately, Confucius was born at a time of crisis and violence in China. He hoped his ideas and teachings would restore the order of earlier times to his society as active as he was in politics. But he never had enough political power to put his ideas in to practice. Nevertheless, his ideas would become the foundation of Chinese thought for more than 2,000 years.

As a key aspect in Confucianism, filial piety, the respect children owe their parents. Traditionally, filial Piety is complete obedience to one’s parents during their lifetime. It also requires the performance of certain rituals after their death.

These are the relationships between ruler and subject, father and son, husband and wife, older brother and younger brother, friend and friend.

Meanwhile, a code of proper conduct regulates each of these relationships. For example, rulers should practice kindness and virtuous living. In return, subjects should be loyal and law-abiding.

Like the ethics of all other religions, Confucianism also has the Golden Rule which says: “Do not do unto others what you would not want others to do unto you.”

Similarly, the Analects is the book of Confucianism that contains the ideas and thoughts of Confucius and was compiled by his students.

According to a selection in the Analects:

“Don’t worry if people don’t recognize your merits; worry that you may not recognize theirs.”   Analects 1.16

In the final analysis, empirical studies have shown that none of the widely known religions encourages violence, enmity and killings neither do they encourage oppression and corruption.

While many religions exist all over the world, all of them have their fundamental teachings based on common acceptable virtues for all mankind, and their faithful are strongly advised to always imbibe the virtues of: kindness, tolerance, love, devotion to one’s religion, generosity, patience, etc. Every religion condemns the act of throwing good food away while your neighbour is going through the emotional pain of pangs of hunger.

Apparently, there are no conflicting ideas between religion and concept of moral standards. The two work together without contradiction as a result of relationship which exist between them and they both frown upon social vices in all its forms.

Here, it is worthy of mention that Christianity is the ideal religion for Christians, Islam for the Muslims, Judaism for the Jews and so on. It is simply a matter of commitment to one’s religion and demonstration of its teachings with sincerity and in consonance with its principles.