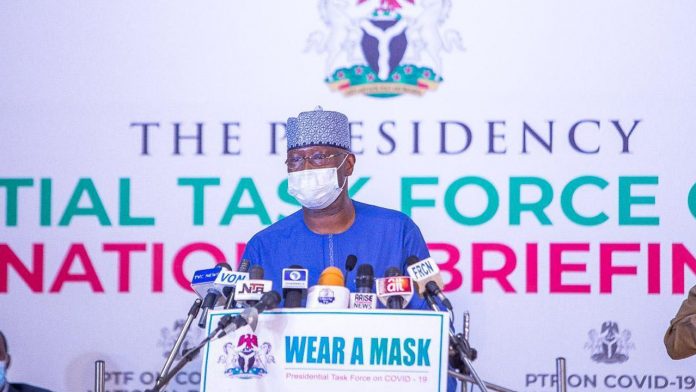 The Secretary to the Government of the Federation and Chairman, Presidential Steering Committee (PSC) on COVID-19, Boss Mustapha has disclosed that government workers across the country will from December 1 be required to present proof of COVID-19 vaccination before reporting at work.

Mustapha made this known yesterday in Abuja at a PSC briefing, stating that the government would issue new safety protocols in the next 24 hours.

On the new directive, the chairman said public servants would have to present a negative COVID-19 PCR test result done within 72 hours to gain access to their offices in all locations within Nigeria and the country’s foreign missions. He said an appropriate service-wide advisory/circular would be issued to guide the process.

Mustapha stated that statistics generated over the last four weeks from test results showed that the trend of infection was going down in some states while in others, the trajectory was rising. He put the combined total for testing by PCR and RDT at 3,141, 795 million persons.

He added that talks were ongoing to resolve the diplomatic impasse between Nigeria and the United Arab Emirates (UAE) over testing requirements for Nigerian travellers to the UAE.

Mustapha said the aviation authorities, in collaboration with the Ministry of Foreign Affairs, had made reasonable progress to resolve the issue.

On the removal of South Africa, Turkey, and Brazil from the list of restricted nations, Mustapha said their exclusion was with immediate effect. The three countries were among the worst nations ravaged by the deadly COVID-19 Delta strain that claimed many lives.

He said the decision to ease the restriction was taken by the PSC following a session on Wednesday, where the committee reviewed developments in the affected countries.

India was removed from the list on September 13 by the federal government in response to the improved situation in the country.

Mustapha said, “As you are aware, the UK has eased restrictions on fully vaccinated travellers from Nigeria to the UK with effect from 11th October. Nigeria welcomes this development and assures that the PSC shall continue to review Nigeria’s protocols based on global developments, science and national experience. A revised protocol will be issued in the next 24 hours.”

The PSC chairman also put the public on notice concerning the two major religious festivities – Salah and Christmas – that were approaching, warning that there would be increased passenger traffic in and out of the country.