At least 6 killed, dozens wounded in gunfire near Beirut protest

Gunfire erupts near Hezbollah-led protest calling for the removal of the judge from Beirut blast investigation. 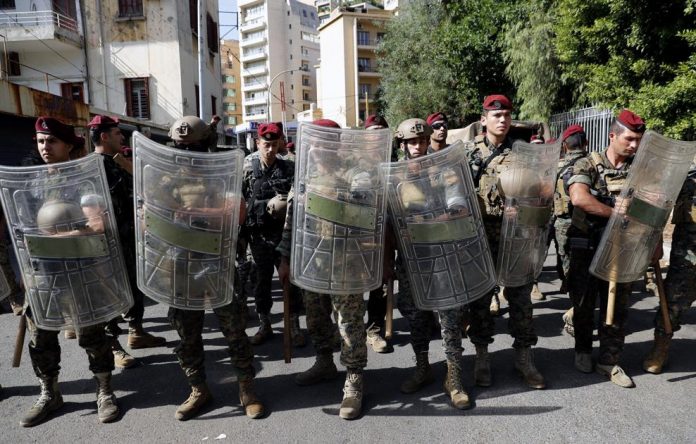 Beirut, Lebanon – At least six people have been killed and dozens of others wounded when gunfire erupted as Hezbollah supporters gathered to protest against the judge investigating the Beirut port explosion.

Hundreds of Hezbollah supporters and allies wearing black gathered at the Beirut Justice Palace on Thursday, calling for the removal of Judge Tarek Bitar from the Beirut Port explosion probe, accusing him of bias.

Bursts of gunfire were heard coming from the nearby Tayyoune neighbourhood, scattering the angry protesters.

At least six people were killed and more than 30 others were wounded by gunfire, the Lebanese Red Cross told Al Jazeera. The identities and affiliations of the shooters were not immediately clear. The army deployed heavily to the area and sent troops to search for the gunmen. It urged civilians to leave the area around the incident.

In a joint statement, Hezbollah and its ally Amal accused the Christian Lebanese Forces party of being behind the shooting.

“Groups from the Lebanese Forces party dispersed on building rooftops and directly sniped with intent to kill,” the statement read. They called on their supporters to remain calm and “not be drawn to malicious discord”.

Lebanese Forces leader Samir Geagea said in a statement that he condemned Thursday’s clashes, but did not respond to accusations from Hezbollah and Amal. “The main reason for these events are loose and widespread weapons that are a threat to citizens anywhere at any time.”

President Michel Aoun said in a brief address to the nation that the clashes were a “painful and unacceptable scene”.

“It took us back to the days that we said we would never forget and never repeat,” he said in his televised address, referring to the country’s 15-year civil war from 1975 until 1990.

Prime Minister Najib Mikati called for calm and warned against attempts to drag Lebanon into violence.

Armed clashes echoed in the capital for several hours, with exchanges of fire involving snipers and rocket-propelled grenades.

Residents in nearby neighbourhoods told Al Jazeera that the clashes continued as Civil Defence volunteers worked to evacuate families trapped between the crossfire.

Bissan Fakih, a resident in the Furn el-Chebbek neighbourhood adjacent to Tayyoune, said she was at home with her cousin and aunt when the gunfire erupted.

“I was really scared about this happened [during the protest],” she told Al Jazeera. “I survived the [2006] war, I survived the explosion [Beirut blast], and now there are these clashes.”

The violence erupted amid soaring tensions over the probe into the devastating explosion at Beirut’s port on August 4, 2020. The protesters gathered in the Lebanese capital two days after Hezbollah Secretary-General Hassan Nasrallah’s most scathing criticism of Bitar to date. Nasrallah accused the judge of “politically targeting” officials in his investigation.

The judge has also asked to summon General Security chief Major-General Abbas Ibrahim and State Security head, Major-General Tony Saliba. However, the interior ministry and Higher Defence Council did not grant him permission to do so.

Earlier on Thursday, a court dismissed a legal complaint issued by Khalil and Zeiter, allowing the judge to resume the investigation.

More than 200 people were killed and about 6,500 wounded in the explosion at Beirut’s port last year, when a huge stockpile of ammonium nitrate, which had been stored unsafely at the port for years, detonated.

The blast was one of the largest non-nuclear explosions ever recorded, and the most destructive single incident in Lebanon’s troubled history. Entire neighbourhoods of the country’s capital were destroyed.

No officials have been convicted so far.

However, ministers belonging to Hezbollah, Amal, and some allies have reportedly pressured the cabinet to take a formal position against Bitar.