- a total of 126 constituency projects located in Kano South and parts of Kano Central, Senatorial districts were tracked 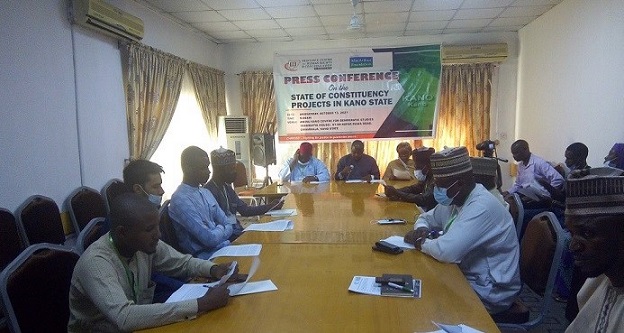 Constituency projects in Kano South and parts of Central Senatorial districts do not have the interest of the people and are poorly implemented.

The Executive Director, Resource Centre for Human Rights & Civic Education (CHRICED), Comrade Dr. Ibrahim Zikirullahi who was represented by the Programs and Communications Manager, Mr. Armsfree Ajanaku revealed in a press conference on the state of constituency projects in Kano State, held at the Aminu Kano Centre for Democratic Research and Training on Wednesday.

The organization tracked a total of 126 constituency projects located in Kano South and parts of Kano Central, Senatorial districts.

“Our findings and experiences gathered during the two-week tracking exercise are heart-rending and totally unacceptable.

“We noticed several disturbing trends, which make it apparent that many of those implementing the projects, do not have the interest of the people at heart.

“We observed with dismay that projects implemented during the period under review (2019 -2020 budget cycle) had very limited impact on the target communities, either due to their insufficient quantity, poor quality or the failure to carry along target beneficiaries in the planning and execution of the projects.

“The question then is; what impact can a single streetlight have on an entire village,” he inquired.

In terms of project cost effectiveness and value for money, he said CHRICED observed that a good number of the projects tracked were not cost effective and offered very low value for the huge sums of money expended on them.

“A critical analysis of the bills of quantity for some of the projects tracked revealed that contracts sums were often over bloated. After collecting these largely over bloated sums for the awarded contracts, the contractors still deliver less than what was specified in the contract agreements.

He however said an analysis of some of the contract award documents made available by officials of the ICPC and CSOs revealed that a unit of the solar panel was awarded to contractors at a unit cost ranging from N618, 000.00 (Six Hundred and Eighteen Thousand Naira) to N700, 000.00 (Seven Hundred Thousand Naira), meaning that the solar-powered streetlights were awarded to contractors at a unit price that is about four times the actual market value of the product,” he added.

Comrade Zikirullah said a further analysis of documents made available by officials of the ICPC also showed that the contracts for the blocks of classrooms (which constitute majority of the projects tracked) were awarded at an average cost of about N14,000,000.00 (Fourteen Million Naira).

However, CHRICED independent analysis, which was also corroborated by the Quantity Surveyor in the team revealed that the value offered by the contactors in most cases was far below the amount said to have been expended, and in some cases, the projects were not fully implemented as some of the contractors only constructed the classroom buildings but the furniture were not supplied as stipulated in the contract terms.

“Findings in the course of the tracking exercise also indicated that the quality of many of the projects implemented were poor and substandard, when compared with the quantum of funds expended by the government to execute the projects.

“CHRICED analysis of the bill of quantities for some of the projects tracked revealed that the contactors used inferior materials for construction and project execution, while some of those handling supplies and procurement contracts supplied inferior, cheap and substandard brands and models of the items said to have been supplied, despite quoting high and sometimes outrageous prices in their bidding documents.

“For instance, many of the blocks of classrooms said to be constructed in the year 2020 are already looking dilapidated as at September 2021 when the tracking exercise took place. The plastering, roofing and painting of many of the classroom blocks were done shoddily, and in some cases, electrical wiring and fittings were not even done at all, while they were all quoted in the bills of quantity accompanying the contract award.

“Some of such poorly executed projects include: a block of classrooms at YarYasa Town Primary School in Tudun Wada Local Government Area of Kano state, constructed by Global Merchant Limited, under the supervision of the Universal Basic Education Commission in 2020.

“There is also the block of three classrooms at Government Girls Arabic Secondary School Toranke, handled by Jessifas Synergy Limed and supervised by Nigerian Building and Road Research Institute (NBRRI); a block of two classrooms at Tassa Primary School in Dawakin Kudu Local Government, constructed by Puranova Nigeria Limited under the supervision of the Universal Basic Education Commission, among others documents.

“It was also observed that some projects were abandoned at various stages of execution either due to failure on the part of the contractor to complete the job after full payment of agreed contract sum or due to lack of release of funds by the government.

“Examples of such projects include: the construction and furnishing of a block of four classrooms at Nomadic Primary School, Wurobagga, Hotoro in Nsaarawa Local Government Area of Kano State, awarded to Zyrax Construction Limited through the Institute for Peace and Conflict Resolution; a project for the construction of a Computer Centre at Minjibir Model School awarded to Tahlil Global Links Limited through the National Teachers Institute, Kaduna since November 2019.

“There was also a solar-powered borehole project at Falgore, in Doguwa Local Government Area awarded to SAT Engineering Service through the Hadejia Jamaare River Basin Authority, which packed-up barely six months after the project was handed over to the benefiting community,” he disclosed.

According to Comrade Zikirullah, people from the benefitting community reported that the project was handed over to them in February 2021 and by August 2021, the taps had stopped running.

“As at September 10, 2021 when the tracking team visited the site of the project, some of the pumping machine components of the project have been removed and kept in a store by members of the community.

“CHRICED observed that the projects tied to training and empowerment of constituents by the legislators where poorly implemented, shrouded in secrecy as they lacked basic oversight.

“There were no attempts to think in terms of distributive justice and gender and social inclusion in the course implementing the projects.

“There was the trend of using projects to compensate political supporters, families, friends, party loyalists and partisan associates rather than for human capacity development and citizens’ empowerment,” he added.

CHRICED found in the course of the exercise that it was difficult, if not impossible to track the funds allocated for these so-called empowerment programs, as empowerment materials said to have been supplied and distributed could not be traced.

He said there was a case in Tarauni Local Government Area where it was discovered that training may not have been conducted as claimed by the consultant, but participants were hurriedly mobilized and issued certificates of participation on the day the tracking team visited the project site.

He noted that it was not all a case of shoddy project implementation.

“Some projects were satisfactorily executed. An example is the cottage hospital constructed in Doguwa Town.

“Another example is the construction of blocks of classrooms in a primary school in Fuskar Ma’aji in Tudun Wada LGA.”

Comrade Zikirullah called on Citizens, the media, CSOs, CBOs and importantly, the teeth actors to stay on course and ensure that some measure of sanity is restored to the constituency project implementation process, not only in Kano State, but all over Nigeria.

Fielding questions from journalists on why are contractors not being prosecuted and the scope of the constituency projects tracked?

He said CHRICED is using the “voice strategy” as it does not have the power to prosecute, but it has been advocating that where there are infractions, teeth actors should move in and hold contractors accountable.

On the scope of the constituency projects tracked, he responded that the focus for now is on the 126 projects located in Kano South and parts of Kano Central, Senatorial districts. Other locations will be capture in the next phase.