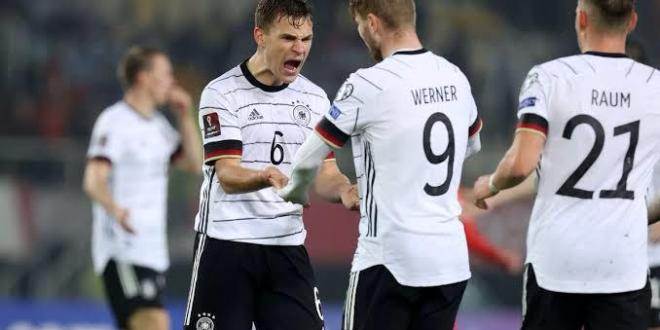 Germany became the first team to punch its ticket to Qatar for the 2022 World Cup when it clinched first place in its qualifying group on Monday.

Germany needed a win over North Macedonia and an Armenia loss or draw to qualify with two games to spare and got just that. Romania defeated Armenia 1-0 and goals from Kai Havertz, Timo Werner (two) and Jamal Musiala powered the Germans to a 4-0 win on a rainy night in Skopje.

In the process, Germany avenged its shocking loss back in March to North Macedonia —only its third ever loss in World Cup qualifying and its first since 2001.

Die Mannschaft have had a rocky last 12 months, with the qualifying loss to North Macedonia, its worst-ever loss in a 6-0 defeat to Spain in the Nations League in November, a round-of-16 exit to England at the Euros and the departure of longtime coach Jogi Löw.

But former Bayern Munich manager Hansi Flick has righted the ship by winning all five of his World Cup qualifiers since taking over for his mentor. The 2014 world champions will now have a chance to make up for their embarrassing group-stage exit at the 2018 World Cup in Russia.

As the host country, Qatar receives an automatic bid, but Germany became the first team to earn its spot through a qualifying process. Winners of the 10 groups in UEFA’s World Cup qualifying round advance to Qatar, while runners-up and the top two Nations League group winners remaining will fight for the region’s final three spots in a playoff.

Denmark can also clinch its group on Tuesday with a win against Austria. The Danes have dominated their group, winning all seven of their World Cup qualifiers with a +26 goal differential and without conceding a single goal.