HomeSportsThe results and the defeat
Sports 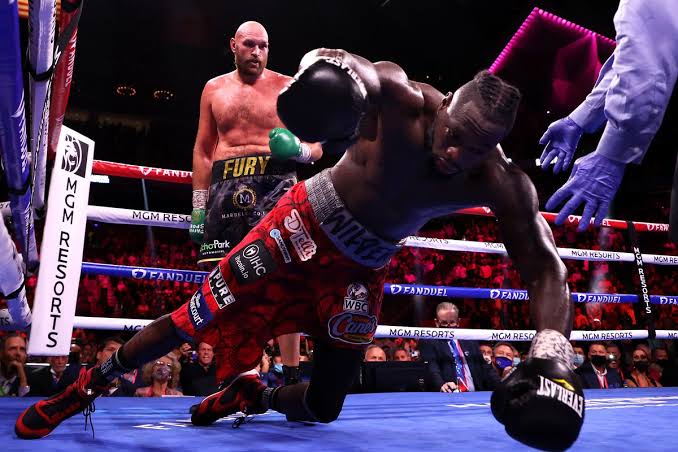 It was a great night for boxing as expected. In a one-sided fight, Sanchez gave Efe Ajagba a boxing lesson. Sanchez won on with unanimous decision.

While In the main event, Tyson Fury brilliantly retained his WBC crown over Deontay Wilder after rising from the canvas twice in an instant classic in Las Vegas.

Tyson Fury got up from two fourth-round knockdowns and stopped Deontay Wilder in the 11th round Saturday night, retaining his WBC title in a thrilling conclusion to a superlative heavyweight trilogy.

Fury (31-0-1, 22 KOs) finished Wilder for the second straight time in their three bouts, but only after a wild back-and-forth evening featuring five combined knockdowns.

“It was a great fight,” Fury talking his victory. “It was worthy of any trilogy in the history of the sport. He’s a top fighter, and he gave me a real (test) tonight.”

Wilder was knocked down in the third round and appeared to be on his way out, but he improbably rallied to knock down Fury twice in the final minutes of the fourth.

Wilder (42-2-1) absorbed enormous punishment and appeared to be physically drained for much of the bout, but the veteran champion showed his toughness while still throwing power shots on weary legs.

Fury knocked down Wilder again with a concussive right hand midway through the 10th, but Wilder stunned Fury in the final seconds of the round.

Fury finally finished it in the 11th, sending Wilder face-first to the canvas with a chopping right hand fired from high in the air. Fury celebrated in a frenzy on the ropes before a frenzied crowd of 15,820 at T-Mobile Arena on the south end of the Las Vegas Strip.

Tyson Fury insisted he never thought he was losing after being knocked down twice by Deontay Wilder in the fourth round of this great trilogy.

Fury, who ultimately won by knockout in the eleventh round, seemed to be closing in on a far earlier victory when he dropped Wilder in the third round of their trilogy fight.

But in the following round, he was caught flush by a straight right hand that sent him sprawled to the canvas. Fury rose to beat the count but was yet to fully recover and was knocked down again in the round as Wilder attempted to finish the fight.

Fury remains unbeaten and has now cemented his legacy as the best heavyweight of his generation. He admitted he was “shaking” but didn’t considered himself on the brink of defeat.

The victory means that Fury will be ordered to face his mandatory challenger, Dillian Whyte, next in what could be a possible homecoming fight in Manchester.

Had it been Fury didn’t get the knockout victory, Fury would have still won because he was leading on all three judge’s scorecards. This meaning Wilder would have needed a knockout, or at least several knockdowns, in the final round.

In the other fight card of the nigh, Robert Helenius proved Saturday night that his first stoppage of Adam Kownacki wasn’t a fluke.

Helenius basically beat up a defenseless Kownacki throughout their rematch, until referee Celestino Ruiz determined that Kownacki shouldn’t continue during the sixth round of their scheduled 12-round heavyweight fight.

Ruiz deducted a point from Kownacki for low blows in the fifth round and halted their one-sided rematch in the sixth round because Kownacki, whose left eye was swollen shut and had taken too much punishment on the pay-per-view undercard.

Dangote Set to Hand Over Refurbished National Stadium to FG