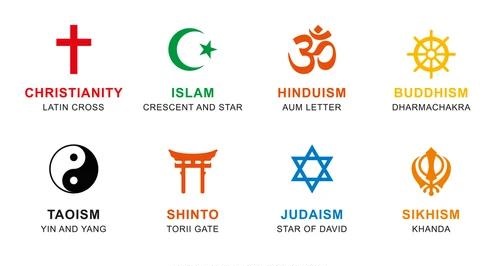 “Because of that we ordained for the children of Israel that if anyone killed a person not in retaliation of murder, or (and) to spread mischief in the land —- it would be as if he killed all mankind, and if anyone saved a life, it would be as if he saved the life of all mankind. And indeed, there came to them our messengers with clear proofs, evidences, and signs, even then after that many of them continued to exceed the limits in the land.”   Qur’an 5:32

And such were some of you. But you were washed, you were sanctified, you were justified in the name of the Lord Jesus Christ and by the Spirit of our God.”

Faith as used here, is synonymous with religion. It is defined by many scholars and it has been proved lexiconically to be an organized system of beliefs, ceremonies practices, and worship that centres on one or more gods. While morality is a set of principles for moral acts: A standard of behaviour considered acceptable, right and followed by a particular group of people.

Obviously, religion had a significant impact on world history. Throughout the centuries, religion has guided the beliefs and behaviour of millions around the world. It has brought people together. But it has also got them drifted apart.

As religion continues to be a dominant force throughout the globe, affecting virtually all aspects of human life from what people wear to how they behave. It is good not to be unaware of the fact that thousands of religions exist in the world. This feature, meanwhile, concentrates on five major religions and on Confucianism, an ethical system or moral philosophy.

It examines some of the characteristics and rituals that make these religions and systems similar as well as unique. Also, it presents some of each religion’s sects and denominations.

A religious sect could be described as a faction that distinguishes itself by one or more unique beliefs within a large group.

A detailed analysis of these religions is given thus.

Buddhists are united in their belief in the Buddha’s teaching, known as the dharma, Because the Buddha is said to have “set in motion the wheel of the dharma” during his first sermon, his teaching is often symbolized by a wheel. The Buddha teaches that the key to happiness is detachment from all worldly goods and desires. This is achieved by strict adherence to the Noble Eightfold path, or the middle way, (The symbol of Buddhism) a life between earthly desires and extreme forms of self-denial as represented by its symbol.

Moreover, talking about the ritual aspect of Buddhism, the Buddhist sweep the ground so that the monks can avoid stepping on and killing any insects. Also, many Buddhists believe in re-incarnation, the thought that living beings, after death, are reborn and continue to live. It is the belief of Buddhism that all living beings possess the potential for spiritual growth.

While this feature will be incomplete without mentioning the leadership of Buddhism, the Monk is a male follower of Buddhism who leads a life of celibacy and poverty be begging for food and money. Also, the Nun is a female follower who dedicates her life and often live in a convent.

Meanwhile, in Buddhism, the following animals are regarded as the three cardinal faults of humanity with what they depict written against each of them.

About the scriptures, The Dhammapada — one of the most well-known Buddhist scriptures, it is also known as Verses of Righteousness. The Book is a collection of sayings on Buddhist practices. In this verse, Buddhist are instructed to avoid envying others:

According to christian ritual, each year, hundreds of thousands of Christians from all over the world visit the Basilica of Guadalupe in northern Mexico City.The church is considered the holiest in Mexico. It is near the site where the virgin Mary, the mother of Jesus Christ, is said to have appeared twice in 1531. Out of deep respect for Mary, some Pilgrims approach the holy Cathedral on their knees.

Furthermore, worshipping collectively is an important part of Christian life. Most Protestant services include praying, singing and a sermon. Some services include baptism and communion, in which bread and wine is consumed in remembrance of Jesus’ death.

Meanwhile, leadership in Christianity is a point worthy of mention. In some Christian churches, the person who performs services in the local church is known as a priest. Priests like the ministers and clergy in other Christian sects, conduct worship services and preside over marriages and funerals.

While the fish is believed to be an early symbol of Christianity. There are many theories about the origin of the symbol, some Christians believe that it derives from the fact that Jesus called his disciples, or followers, “fishers of men.”

Hinduism: One of the world’s oldest surviving religions, is the major religion of India. It also has followers in Indonesia, as well as in parts of Africa, Europe and the Western Hemisphere.

Hinduism is a collection of religious beliefs that developed over thousands of years. Hindus worship several gods which represent different forms of Brahman. Brahman is the most divine spirit in the Hindu religion. Hinduism like Buddhism, stresses that persons reach true enlightenment and happiness only after they free themselves from their earthly desires. Followers of Hinduism achieve this goal through worship, the attainment of knowledge, and a lifetime of virtuous deeds. The sound “Om,” or ” Sum,” is the most sacred syllable for Hindus. It is also a Hindu mantra.

As thousands of Hindus make a pilgrimage to India’s Ganges River regarding Hindus ritual and celebration each year, the Ganges is believed to be a sacred site in Hinduism. Most Hindus come to bathe in the water, a religious observance they believe will cleanse and make them holy. The sick and disabled come in the belief that the holy water might cure their ailments.

It is also worthy of note that, each spring, Hindus in India celebrate the festival of Holi. Originally a harvest festival, Holi also symbolizes the triumph of good over evil. The festival recalls the story of prince Prahlada, who faced death rather than cease worshiping Vishnu. During this joyous celebration, people dance in the streets and shower each other with coloured powder and dyed water.

Talking about leadership in Hinduism, Gurus or spiritual teachers, play a major role in spreading Hindu beliefs. These holy men are believed to have had the god’s words revealed to them. Brahmin priests are religious leaders. They take of the divine images in the temples and read from the sacred books.