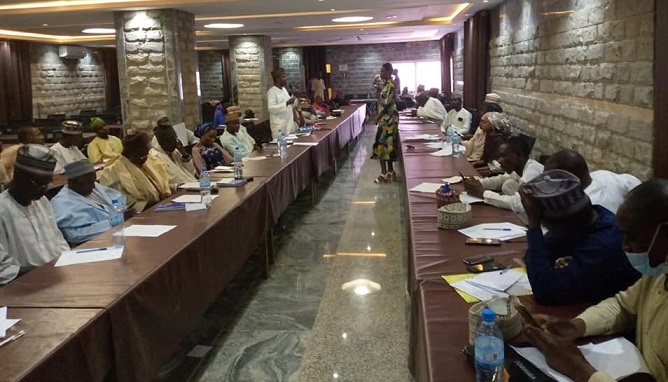 The Sensitization Meeting was organized by PERL-FCDO Kano, through the SFTAS program.

According to Tari, as at 2018 when the program started only about four states were publishing budget on their websites, but today as at the last Annual Performance Assessment report over fifteen states have published.

She added that, “we are seeing impact and hoping that by next year when the program is coming to an end, states that have started these reforms would be able to continue and sustain it.

She charged CSOs to ensure the sustainability of the reforms by asking the right questions and making demands, adding that one of the objectives of this program is, if CSOs to know what government is publishing, they can use such documents to hold it accountable.

“They have to ask right the questions. They have to use citizens budget to train other citizens who are not part of the public consultations to ask the right questions to further hold government accountable and to ensure service delivery is actually improved through this process.”

“The sensitization is to empower citizens, academic, traditional rulers and journalists on how to engage government to ensure it access SFTAS grants.

“One good thing about this is, it will improve the economic status of the state, because this is a grant coming to the state without doing much.”

“The emphasis is to look inwards and tap from the underlying potential that is within and connect with our colleagues working in the area of reforms.

“Honestly, Kano needs to take deliberate steps towards scoring all pre-requisites of the DLIs to win the World Bank grants,” he said.

Hamza further explained that the DLIs are derived from the country’s 22-Point Fiscal Sustainability Plan and the 14 Open Government Partnership (OGP) commitments aimed at strengthening fiscal transparency, accountability and sustainability across all States of the Federation.

The World Bank-assisted SFTAS Program was principally to strengthen fiscal management at the State level, so as to ensure effective mobilization and utilization of financial resources, to the benefit of their citizens in a transparent, accountable and sustainable manner, thereby reducing fiscal risks and encouraging a common set of fiscal behaviours.