HomeEnvironmentCrisis over compensation in Delta community due to Oil discovery
Environment

Crisis over compensation in Delta community due to Oil discovery 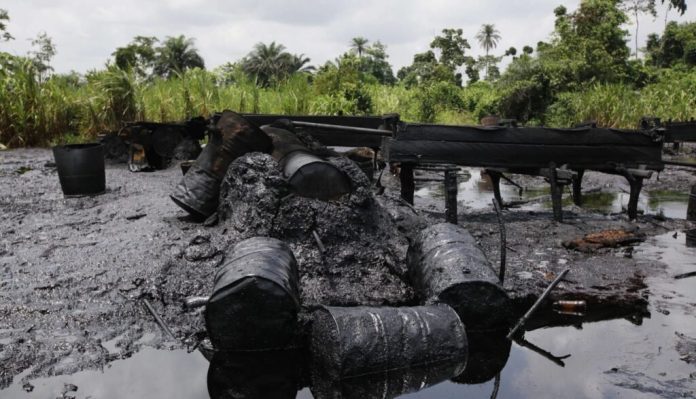 A drama is being witnessed at Oviri-Olomu community, Ughelli South Local Government Area of Delta State, South-South Nigeria, due to the compensation by Nigerian Petroleum Development Company (NPDC) for a fresh oil discovery.

Five families: Edariese Efedjamah, Irevwiruemu, George Akanuota, Onakota and Ashe, claiming ownership of Evue/Igbighogho bushes in the community where oil was discovered, alleged that some “faceless persons” pocketing the gains of the oil money ‘have sidelined’ them.

At a recent press conference in Local Government Area (LGA), they expressed their total displeasure.

A member of the Edariese Family, Elder A.P. Edariese said: “The five families have been grossly denied their rights to fair compensation for their properties destroyed on the land and denied all payments for loss of use of the land as well as their rights to be paid anything under the freedom to operate, both at the time of preparation for drilling and now that the company has moved into the land for drilling purposes.

“We are equally denied of our rights to job slots.

“The land is not owned by the Oviri-Olomu Community, Individuals and families own the lands. NPDC should respect the five families for decency, reasonable fairness and justice, and allow peace to reign supreme if they want to do business in the land.”

Nigeria is very popular for its vast oil resources.

Delta State is one of the highest oil-producing states, as well as one of the richest states in Nigeria.