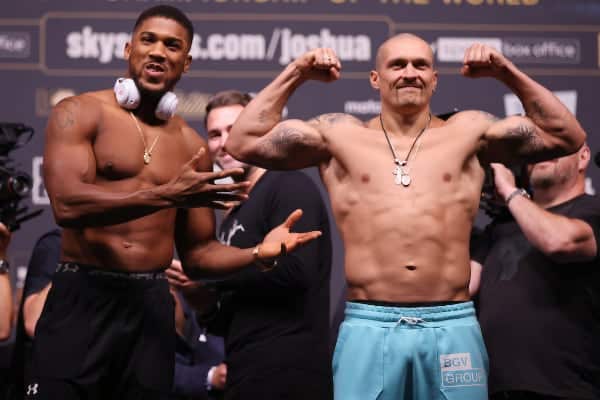 On an action-packed undercard, Lawrence Okolie defends his WBO cruiserweight title against Dilan Prasovic, while Callum Smith returns at light-heavyweight against Lenin Castillo, and Campbell Hatton continues his pro career against Sonni Martinez.

Joshua and Usyk each won Olympic gold at London 2012. Since then, while Joshua has become a two-time heavyweight champion, Usyk won the undisputed cruiserweight title.

He is now bidding to become only the third boxer to win world titles at cruiserweight and heavyweight.

Joshua said about his mandatory challenger: “Respect? Fear? It’s just a fight. I’m not someone who will be disrespectful unless someone is disrespectful to me.

“I respect the man. He has achieved phenomenal things.”

With two power punchers locking horns in front of over 60,000 fans, there promises to be fireworks as the eyes of the sporting world descend on north London.

Usyk boasts an unblemished record through 18 fights and was previously the only man in history to unify the cruiserweight division.

He claimed the WBO Inter-Continental heavyweight title in October 2020 against another Brit, Derek Chisora, and has previously stopped Merseyside scrapper Tony Bellew.

It’s not what Joshua wants as his dream is to hold all four world heavyweight titles. Joshua has to dispose of Usyk and then hopefully he’ll take on either Fury or Wilder in late 2021 or next year.

The British boxer has a professional record of 24 wins and a defeat by Andy Ruiz Jr. It’s five years since he first became a world heavyweight champion, when beating Charles Martin, just two years after turning professional.

His last title defence was in December of last year, beating Kubrat Pulev in nine rounds. Now he returns to the ring and it’s a fight he cannot afford to lose. If that happens, then he will get a return fight with Usyk but that fight for all the belts will be further delayed.

Below is the undercard for the D-Day:

Dangote Set to Hand Over Refurbished National Stadium to FG