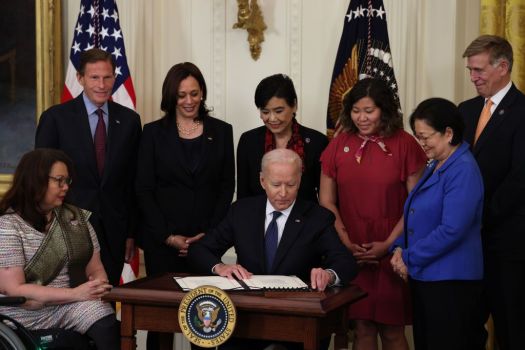 Two members of the U.S. Congress instrumental in the passage of anti-hate crime legislation this year are pressing the Department of Justice to step up enforcement of the measure, warning that reinstatement of pandemic-related restrictions is likely to provoke more attacks — particularly on Asian Americans.

“As the pandemic wears on and COVID-19 variants cause states, localities, or private entities to reinstate restrictions or public safety mandates, frustration with the virus will undoubtedly resurface,” Sen. Mazie Hirono, a Democrat of Hawaii, and Representative Grace Meng, a New York Democrat, wrote Monday in a letter directed to Attorney General Merrick Garland.

“We fear the impact this could have on perpetuating hate-based violence against people,” they added. “Full implementation of the COVID-19 Hate Crimes Act will help stem the tide against further violence.”

Advocates for the Asian American and Pacific Islander community blame rhetoric from political leaders, especially former president Donald Trump, who relentlessly blamed the coronavirus pandemic on China, for driving up anti-Asian bias during the pandemic.

The letter comes not long after a report that hate crimes in the United States spiked sharply in the first year of the coronavirus pandemic, rising by about 14% to 8,305, the highest level since 2001 and the third-highest since the Justice Department began tracking bias crimes.

The rise was driven by sharp increases in bias crimes against Asian and Black individuals and was far higher than the Federal Bureau of Investigation originally reported when it released 2020 crime statistics late last month showing only a 6% increase.

The discrepancy in the numbers, reported by the Washington Post, was blamed on a technical problem that incorrectly under-reported data from the state of Ohio.

Black people are far and away the most common victims of bias crimes in the United States. Including the updated information from Ohio, there were nearly 2,900 recorded incidents of bias crimes against Blacks in 2020. That’s an increase of more than 45% from the previous year. Hate crimes resulting from anti-Black bias accounted for about 35% of all hate crimes in the U.S. in 2020.

Asians in the U.S. experienced the highest percentage increase in hate crimes last year. Between 2019 and 2020, the number of crimes rooted in anti-Asian bias jumped by 70%. The roughly 274 anti-Asian crimes reported in 2020 reflected about 4% of the country’s total.

Hate crimes targeting White people make up the second largest total category measured by the FBI, at about 10% of the total. Crimes against Jewish people made up about 9%.

It is important to recognize that there are significant flaws in the reporting system that combine to significantly understate the extent of the problem.

In addition to the fact that many bias attacks are never reported to law enforcement in the first place, nearly one in five of the 18,623 law enforcement agencies in the country do not report hate crime statistics to the FBI.

Further, there is a strong likelihood that even many of those that do report statistics to the FBI are undercounting the real prevalence of bias crimes. In any given three-month period, a large majority of law enforcement agencies that do participate in tracking hate crimes report that there were none in their jurisdiction during that time period. In 2020, 64 jurisdictions with populations of more than 100,000 people reported not a single hate crime.

“The fact that so many law enforcement agencies did not participate is inexcusable, and the fact that 64 jurisdictions with populations over 100,000 affirmatively reported zero hate crimes is simply not credible,” Anti-Defamation League CEO Jonathan A. Greenblatt said in a statement when the FBI data was released.

“Data drives policy and without having a complete picture of the problem, we cannot even begin to resolve the issues driving this surge in hate and violence,” Greenblatt added.

The law that Hirono and Meng helped pass, the COVID-19 Hate Crimes Act, is meant, in part, to remedy the poor reporting of hate crimes in the U.S. The bill directs the Department of Justice to issue guidance to law enforcement agencies around the country on how to establish effective hate-crime reporting regimes.

It also tells the FBI to recommend that local agencies keep track of bias “incidents,” such as racially motivated verbal abuse, that do not rise to the level of a crime.

“While these actions are unlikely to rise to the level of a hate crime, the impetus for these actions are the same—fear and xenophobia. In order to meaningfully address the root causes of this bias and hostility, we need a clear and full picture of the scope of the problem. Data on hate crimes alone is insufficient,” Hirono and Meng wrote.

At least 4 dead, 2 missing as bus plunged into River Niger in Kogi