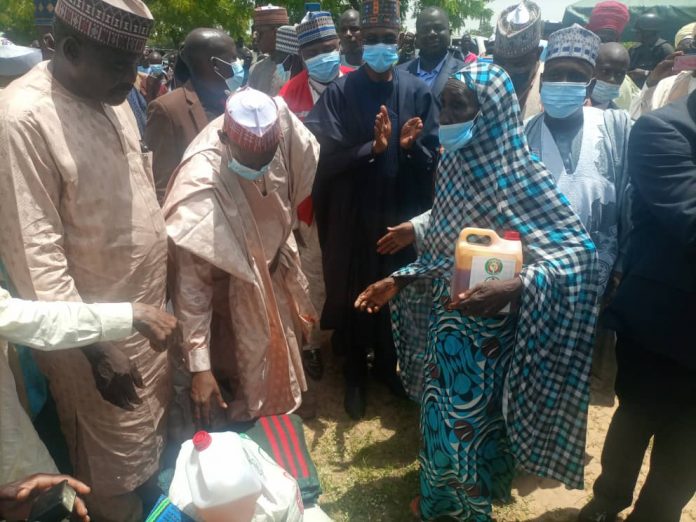 Federal government through Ministry of Emergency and Humanitarian Affairs has flagged off the distribution of relief materials to thousands of 2020 flood victims in 12 states of the federation.

Speaking at the occasion held in Miga Local Government of Jigawa state, the federal Minister of Humanitarian Affairs, Mrs. Sadiya Umar Faruk, said, the relief materials was provided by Economic Community of West African States (ECOWAS) to complements the effort of federal government towards reducing the hardship faced by the flood victims.

The minister who was represented by the permanent secretary of the Ministry, Alhaji Bashir Umar Alkali said the relief materials included cash and in-kind, to be distributed to the 12 states being the worst affected by flood disaster in 2020.

He explained that, ECOWAS has engaged Red-Cross International for management of the distribution exercise.

According to her, 1,600 households of over 9,600 people were given shelter Kits, 65 boreholes were constructed for 896 households and 65 hand-wash point.

“The beneficiaries of cash transfer were selected from 4 states, while food items and other relief materials were distributed to the flood victims across the affected states.

“The materials were not aimed at compensating the victims but to help them to get stabilized and continue with their normal life,” the minister revealed.

In his speech, Jigawa state Deputy Governor, Alhaji Umar Namadi commended federal government, ECOWAS, Red-Cross and other individuals and groups that offered assistance to the flood victims in the states.

He said currently the state government is constructing embankment at different locations as well as taking other measure to address the perennial flooding.