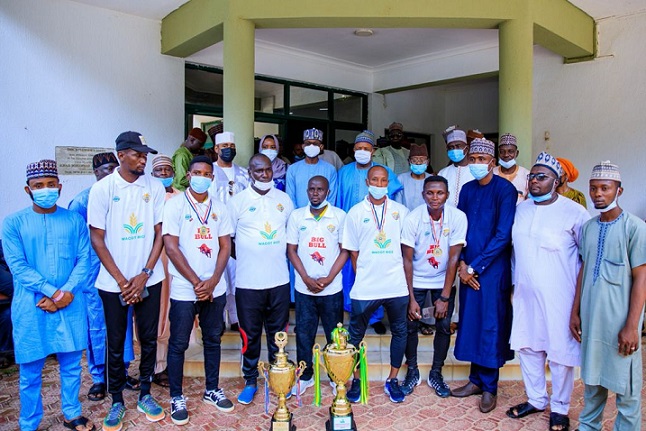 The Kebbi Fishers as they are popularly known are currently ranked No.1 in African and 49 globally by Beach Soccer Worldwide under FIFA.

The company is also​ sponsoring​ the participation of the team in the forthcoming International Beach Soccer Tourney in Europe, as Africa’s flagbearers.

Bagudu unveiled the kits, as well as received the trophies won by the team after they emerged as Nigerian Champions in Kaduna recently.

The Chairman​ APC Governors Forum expressed delight that​ the Chairman and African Beach Soccer Union President, Mahmud Hadejia has led the team well who are making Nigeria and Africa proud.

He said: “In the last four years ago in Copa Lagos 2017, the team has demonstrated what is possible. The team has been ceaselessly blossoming.

“These tangible giant strides by the team could not have been possible without the invaluable support of​ many stakeholders and the Ministry of sports.

“The immeasurable gestures of WACOT led by one of Nigeria’s most brilliant and patriotic Technocrats​ Alh. Farouk Gumel is really very doing well and deserve commendation.

“Another untiring pillar for the Kebbi Beach Soccer Team is my​ wife​ Dr Zainab​ Bagudu, through her foundation Medicaid”

The Kebbi State Governor also expressed optimism that the team will do Nigeria and Africa proud in the next World Club​ Championship.

While commending the team, the govenor​ pledged more​ funding for the team with the support of the State House of Assembly.

He recalled that the state government had trained fifteen youths at the Kwara state Sports Academy in Ilorin.

“One of them is Zaidu Sanusi Jega now a member of Nigerian Super Eagles player with FC Porto, Portugal.

He had earlier acknowledged that the firm has since keyed into the agenda of President Muhammadu Buhari’s food program aimed at bolstering domestic food security, as well as reducing imports and boosting exports.

Bagudu further said that WACOT has shown how home-grown solutions could be achieved to solve Nigeria’s recurring challenges.

Speaking earlier, the Chairman of WACOT, Hon. Faruk Gumel lauded Bagudu for his sustained support to the firm.

He vowed to continue to strive to remain domestically and internationally competitive, just as more would be done to further develop Kebbi State.

Gumel also stated that the company was supporting the team as part of its corporate social responsibility’s initiatives.

The Secretary of the team, Abdullahi Yahaya commended​ governor Bagudu​ and his wife Dr Zainab for​ fatherly and motherly​ support to it team, saying,” both of them are​ the secret to the​ successes.

“We will continue to justify the tremendous confidence reposed on us locally in Nigeria, in Africa and across the World” he assured.

He said​ that, the Kebbi Beach Soccer team defeated Kaduna, Lagos, Anambra and Kwara to emerge as the country’s Champions.

Abdullahi extolled the team’s achievement recorded in just six years of its creation as Nigeria’s Champions and African leaders.