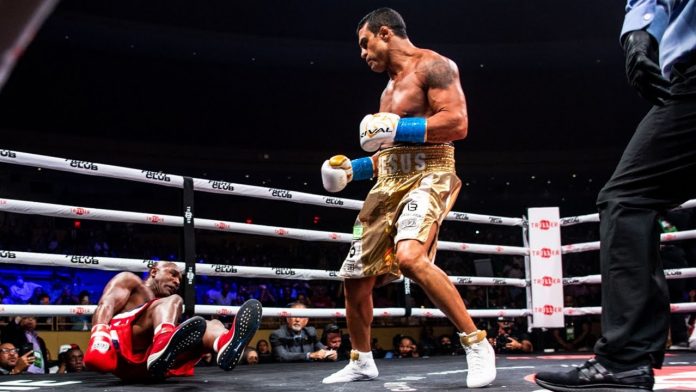 Evander Holyfield should never step into boxing ring ever again. Holyfield stepped in on short notice after Oscar De La Hoya tested positive for COVID-19. The fight was moved from California to Florida because to Holyfield was unable to get licensed in California.

He stepped back into the boxing ring on Saturday night, taking on former UFC light heavyweight champion Vitor Belfort in the main event of a Triller Fight Club pay-per-view. A bout that Belfort cruised to a first-round TKO victory.

As the Nigerian rhetorical pidgin English proverb will ask sarcastically, “who send am?”. Holyfield was off-balance on his early power punches, missing on one wild shot that caused him to spin around and fall to the ground. After Holyfield got back to his feet, Belfort attacked with a hook and an uppercut that sent Holyfield stumbling backward before hitting the canvas.

Holyfield managed to beat the count but Belfort continued his offensive flurry. As the punches continued to land and Holyfield was forced to just cover up until the referee was forced to jump in and stop the fight at the 1:49 mark of Round 1.

Belfort immediately after his victory made a call for more big fights as he said he intends to continue on as a boxer at 44 years old.

He quickly made an offer for a “winner take all” fight with social media star-turned-boxer Jake Paul.

An offer that was immediately backed up by Triller’s executives. Triller CEO Ryan Kavanaugh pumped the offer up to $30 million. Triller execs want for the fight to take place on Thanksgiving weekend.

However, the complications are Paul has stated he wanted to take time off from fighting after his win over Woodley, though he did later agree to a rematch if Woodley followed through with their pre-fight bet of getting.

Winning over Evander must have gotten over head. He is not just asking for the YouTuber boxer but this time Belfort also called out boxing’s pound-for-pound best fighter, Saul “Canelo” Alvarez for another fight that has next to no chance of ever happening. The result big his exhibition bout might have made think he is invulnerable.

Below are results of all fights last weekend: