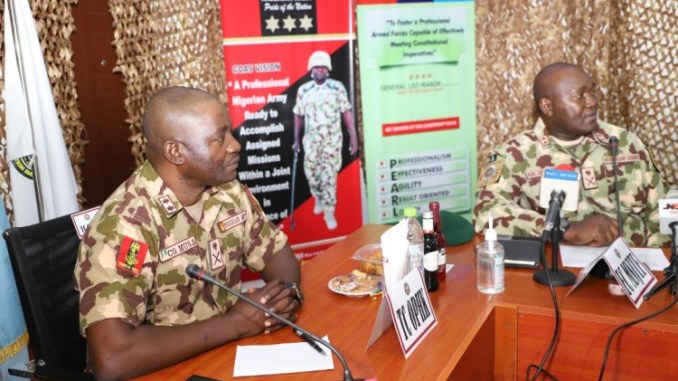 The Chadian Chief of Defence Staff (CDS), Lt.-Gen. Abakar Daoud, has commended the forces of the Multinational Joint Task Force (MNJTF) for their commitment to the fight against terrorism.

Daoud gave the commendation when the Force Commander, Maj.-Gen. Abdul-Khalifah Ibrahim, paid him a courtesy visit in continuation of his consultative engagement with the military hierarchies of the Troops` Contributing Countries (TCC).

The Chief of Military Public Information for the MNJTF, Col. Mohammad Dole, disclosed this in a statement on Sunday, in N’djamena, Chad.

The Chadian defence chief reiterated his readiness for continuous support to the MNJTF in its efforts to clear the Lake Chad islands and environs of the remnants of the terrorists.

He called for effective collaboration among all sectors, to ensure that they succeed in the fight against insurgency in the sub-region.

Earlier, the Force Commander, Maj.-Gen. Ibrahim, solicited the support and direction of the CDS in mitigating some observed challenges in the field.

Ibrahim expressed appreciation for the conducive and secured environment in which the HQ MNJTF was assiduously working to achieve its mandates.

He added that the support of the Chadian military hierarchy was critical in the execution of various MNJTF operations across the Lake Chad region.

Similarly, Ibrahim on a visit to the Headquarters, Joint Task Force (North East) Operation Hadin Kai (OPHK) on Saturday, in Maiduguri, also solicited for more synergy between the MNJTF and the theatre command.

He stressed the need for greater synergy and prompt intelligence sharing, among all the components, to achieve the mission of restoring total normalcy and a return of the displaced communities to their ancestral homes in the Lake Chad basin area.

The commander said that there was significant improvement in the security situation in the Northeast theatre in recent times, saying that the military had recorded impressive achievement.

He said that better cooperation and team work with the MNJTF would stabilise the situation and bring peace to the entire region.

Responding, the theatre commander (TC), OPHK, Maj.-Gen. Christopher Musa, said the visit was another opportunity to explore ways and means to further synergise and collaborate against a common enemy.

Musa assured the FC of his maximum support and assistance to achieve the common objective of speedily ending activities of the insurgents.

He said that no effort should be spared in freeing the region of insurgents’ activities, saying that the Lake Chad basin area was strategic to the member countries.

The TC disclosed that over 7,000 insurgents and their families had surrendered to troops so far and called for a multi-sectoral approach in handling all aspects of the surrender.

According to him, with the renewed spirit of team work and concerted efforts by all involved in the counter-insurgency operations, the end of Boko Haram/ISWAP terrorist was not far off.