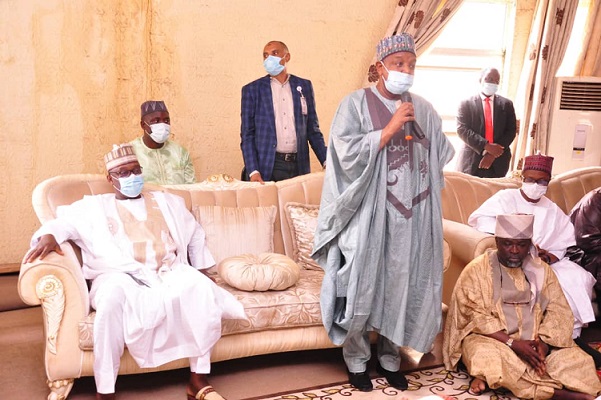 Kebbi State Governor and Chairman, Progressives Governors’ Forum, Abubakar Atiku Bagudu was in Kontagora, Niger State, to condole with the Governor Abubakar Sani Bello and Kontagora Emirate over the death of Alhaji Saidu Umaru Namaska, the Sarkin Sudan of Kontagora.

The Progressive Governors’ Forum Chairman accompanied by top government functionaries were at the Palace of the late Emir at Kanwuri in Kontagora where hundreds of sympathizers thronged the Palace.

Bagudu, while commiserating with the Governor of Niger State, Council members of the late Emir and sympathizers at the Palace, prayed Allah to forgive the deceased and admit him into Aljannah Firdaus.

He also prayed God to give his family and people of the Emirate the courage to bear the irreparable loss.

“We are here on behalf of the Government and people of Kebbi State to offer our heartfelt condolences to Governor Sani Bello and the entire people of Niger state.

“I pray that Allah forgive him and make Aljannah Firdaus his final abode. I also pray that God will give you the courage to bear the irreplaceable loss ‘, he averred.

Bagudu recalled his Secondary School days in the Emirate and the fatherly advice he used to get from the late Emir.

In a remark, Governor Sani Bello thanked and appreciated the visit by Governor Bagudu and his entourage.

He described the visit as laudable gesture capable of strengthening the long existing bond of cordial relationship between the people of Kebbi State, Kontagora Emirate and Niger State, in general.

He extolled the good virtues and indelible works of the late Emir over the long years he was on the throne.

“The good works of late Emir, Alhaji Saidu Namaska transcended beyond the borders of Kontagora up to Kebbi State.

He also commended the late monarch for his vital effort to address insecurity in the area.

Earlier, special prayers were held by Malan Alaramma and Professor Muhammad Abubakar Kaoje for the repose of the soul of the late Emir.

Alhaji Namaska died in the early hours of Thursday in Abuja after a brief illness. He was aged 84 and until his death, remained one of the longest serving Emir in the North, having spent over 46 years on the throne.

The wife of a general is also a general