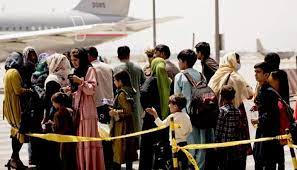 “In the span of a few days, we saved and transferred to Italy 5,011 people, including 4,890 Afghans. Over half of them were women and children, and they were people who cooperated with Italian institutions and who belong to vulnerable groups,” Di Maio told the Italian Senate in a hearing on the situation in Afghanistan.

Di Maio spoke to the Upper House on his return from a tour of the region, stopping in Qatar, Uzbekistan, Tajikistan and Pakistan, where he met Prime Minister Imran Khan.

He explained that the airbridge conducted in cooperation with other allies brought over 120,000 people in total out of Afghanistan, including whole families.

“Italy is the European country to have evacuated the highest number of Afghan citizens,” he said.

Italian Defense Minister Lorenzo Guerini told Arab News during Di Maio’s hearing that the “Italian Air Force was ready to offer its full availability if any further evacuation operations from Afghanistan were requested by the government.”

Di Maio reiterated that Italy, which currently holds the presidency of the G20, “wants to hold an extraordinary G20 summit on Afghanistan and the aftermath of the Taliban’s return to power,” saying “this could be preceded by preparatory meetings of foreign ministers.”

He stressed that Italy wants to “remain at the side of the Afghan people,” a statement backed by the decision of the Italian government to allocate €120 million ($142 million) for initiatives in favor of the Afghan population, including assistance to refugees in neighboring countries, as well as for Italian participation in the implementation of international programs in response to the crisis in Afghanistan.

Those funds, Di Maio assured, will be given “by the end of the year.” They were originally destined for the training of Afghan security forces, but Di Maio said the government was reviewing its plan in order to redirect the funds so that they could be “used for humanitarian aid and for the protection of the most vulnerable parts of the population, such as women, minors and internally displaced persons.”

The Italian government is also considering having a joint presence in Kabul, primarily of a consular nature “as an immediate point of contact” with its international partners under the umbrella of the EU or UN.

The issues of terrorism and the arrivals of migrants for Italy are “reasons for highest concern now.”

Di Maio added that the EU “must have a global approach” in handling the refugee crisis.