Hassan: ‘I send my condolences to the police service and the families of three policemen, and one officer of the SGA security company’ 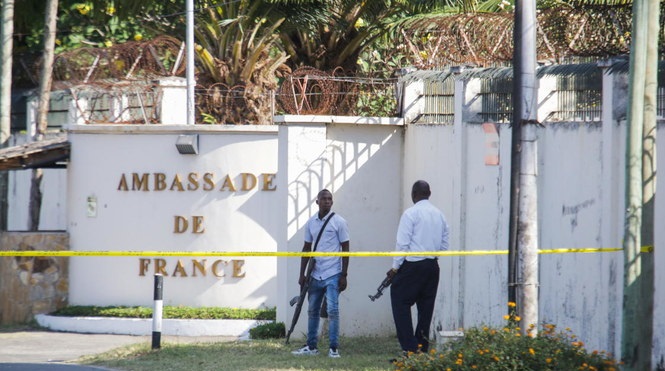 DAR ES SALAAM: An attacker wielding an assault rifle was shot dead after killing three police and an employee of a private security company near the French embassy in the Tanzanian commercial capital Dar es Salaam on Wednesday, President Samia Suluhu Hassan said.

Hassan said on Twitter that the attacker had been “neutralized” and “calm has returned.”

“I send my condolences to the police service and the families of three policemen, and one officer of the SGA security company, who lost their lives after an armed person attacked them in the Salenda area of Dar es Salaam,” Hassan said in a tweet.

Police gave no immediate details on the motive or target of the attacker. Video footage posted online, which could not immediately be verified, showed the gates of the French embassy in Dar es Salaam, a man outside of the gate, and the sounds of gunfire crackling.

Tanzanian television aired footage showing police officers in bullet-proof vests who appeared to be wrapping a dead body outside the embassy in white material to remove it from the scene.

Inspector-General of Police Simon Sirro, police spokesperson David Misime and SGA Security, which describes itself as a major security services provider in East Africa, did not immediately respond to requests for comment.