HomeNewsWhy the weak will always be meat for the strong and the...
News 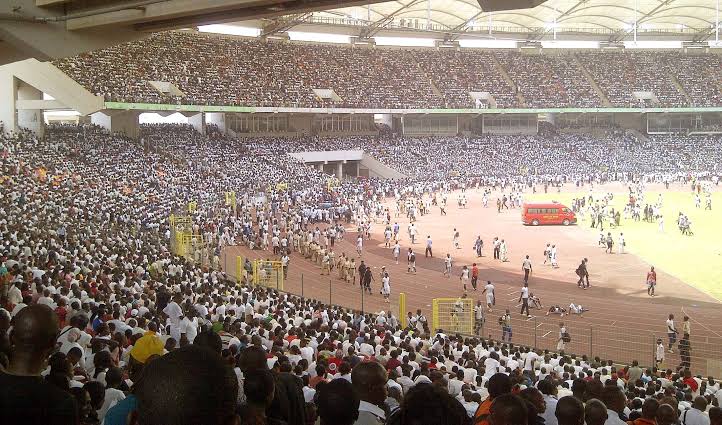 Main bowl of the then National Stadium now named after the acclaimed winner of the June 12, 1993 presidential election, MKO Abiola. The same crowded screening exercise played out across Nigeria when a total of 6.5 million young Nigerian graduates jostled for 4,000 slots at the Nigerian Immigration Service (NIS)

Each prospective candidate had paid the sum of N1000. That was 8 years ago. Not much has changed since then because the fundamental problem is systemic. It is neither APC nor PDP exclusively. It is not North nor South, not even Christian nor Muslim.

It is the inherent nature of the Nigerian socioeconomic and political system as we shall later see.

Anyway, according to a 2017 report by OXFAM entitled, Inequality in Nigeria: Exploring the Drivers,

“The overlap between political and economic power bends the allocation of opportunities, income and wealth to vested interests, and biases policy-making in favour of the rich.

Costs of maintaining the machinery of government are also inflated by the excessive staff numbers, inflated salaries and benefits, arbitrary increase in the number of government agencies and committees, hidden allowances and oversized retirement packages.

The high cost of governance reinforces inequality because it means that few resources are left to provide basic essential services for the wider, growing Nigerian population.

Public resource management is subject to elite capture, corruption and rent seeking, and as such contributes to reproducing inequality and compromises opportunities for inclusive growth.”

OXFAM is an acronym for (Ox)ford Committee for (Fam)ine Relief, a confederation of various charitable organizations focused on the alleviating global poverty established by University of Oxford academics in 1942.

Their 2017 report on socioeconomic and political inequality in Nigeria was characteristically comprehensive.

For instance, they zeroed in on the political class giving examples of how in 2011, Isah Yuguda, governor of the northern Nigerian state of Bauchi, appointed 924 political aides.

To the East, in Imo State, Governor Rochas Okorocha appointed over 100 special assistants. While Governor Olusegun Mimiko of Ondo State in the South-West soon emerged with 563 political appointees all around the same time.

OXFAM then beamed its search light on the National Assembly making a comparative analysis of how, Federal lawmakers which constitute 0.0002% of Nigeria’s population in the Green Chamber;

“Members of the House of Representatives (HoR) get N18.26million annually. When multiplied by 360 members, the grand total is N6.58billion.

N6.58bn can create 1,054 microfinance banks with a capital base of N1bn each in all 774 local government areas to grant rural entrepreneurs and farmers access to loans, thereby creating jobs for at least 500 young people in every local government – a total of 387,000 jobs.”

OXFAM went ahead to state how, “N469 million can provide 1,876 water points in all of Nigeria’s 774 local government areas and address the needs of about 500 households with a ceiling of 7 members in each household per water point, providing 6.5million people with access to potable 1,876 water points.”

Mostly, the children of weak and strong applied for the 10,000 NIS slots back in 2014. They were the ones that appeared for the screening exercise. Those of the very strong don’t have time for such prerequisite distractions. Their employment letters are hand delivered at Daddy’s or even Mummy’s mansion.

Back in 2014 during the fateful NIS screening exercise, over 24 young Nigerians paid the supreme price with scores injured. Fast forward to the present day when more of our children have graduated: what is the way forward on galloping unemployment in Nigeria?

There has to be a complete overhaul in our socioeconomic and political system to make the Private Sector and not the Public Sector the key driver in our nation.

Unfortunately, our very strong would never allow that happen because;

“In Nigeria, politics is war and governance spoils of war. The excessive dependence on oil has compounded by the concentration of the commanding heights of the economy in the hands of Government.

Government then became the fastest and cheapest means of making quick money, a rentier state emerged, intensifying the politics of ‘sharing’ rather than ‘production’.

This created a horde of ‘rent-entrepreneur’, that is the ‘Big men’ without any productive source of livelihood except proximity to state power.”