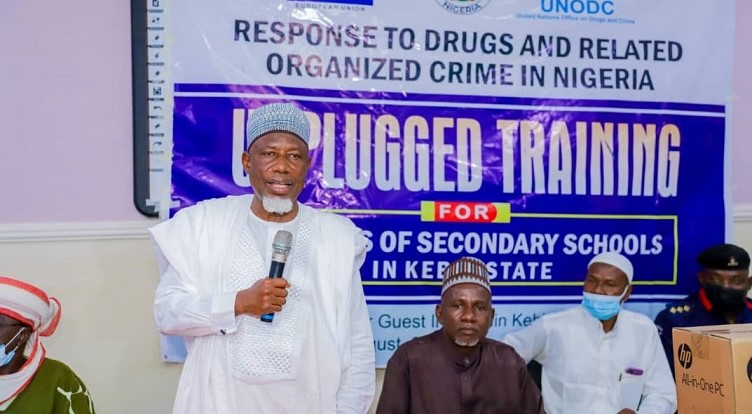 The training program titled: “Response to Drugs and Related Organized Crime in Nigeria Unplugged Training for Teachers of Secondary Schools in Kebbi State”, was conducted by the United Nations Office on Drugs and Crime, (UNODC) and the European Union in conjunction with Kebbi State Ministry of Basic Education.

In his goodwill message at the closing ceremony of the three days training, Chairman, State Taskforce Committee on Drugs Control, retired Assistant Inspector General of Police, Umar Ambursa tasked the participants to impact what they learned during the training to students and immediate communities on the ills of drug addiction.

He noted that Members of the Drug Control Technical Committee will visit schools periodically as part of the campaign against drug addiction among students.

He therefore on behalf of all the DCTC and its patron, thanked the facilitators and trainees for effective participation in the training program throughout the duration of the exercise.

Speaking earlier, representative of the UNODC, Dr. Akanidomo Ibanga explained that the training was designed to work with the Drugs Control Committee to know the situation in Kebbi State as well as expose members to International level.

He added that the objective was to enable UNODC to perform effective role in establishing programs towards reducing drug addiction in secondary schools such as alcohol, tramadol and Indian hemp.

Dr. Ibanga said teachers from fifty-six (56) schools were trained in the current exercise in addition to Sixty-nine (69) who received the training in 2018.

He thanked the Kebbi State Government, and the wife of the Governor, Dr. Zainab Shinkafi Bagudu for facilitating and extending the training program to cover schools at the grassroots.

The Director, Resources, Ministry of Basic Education, Alhaji Abubakar Aliyu NaYelwa who represented the Commissioner, said the training was organized for Secondary School Teachers who in turn would impact the knowledge acquired to  students in furtherance of efforts to reduce drug abuse in schools, adding that government has taken cognizance of the devastating effect of drugs consumption in the osciety and subsequent crime which made it obligatory to curb the trend.

He therefore mandated all teachers to gear up towards improving the moral upbringing of students by discouraging them from drug addiction.

Highlights of the program was presentation of certificates and a brand-new high caliber Laptops to each of the schools at the closing ceremony.