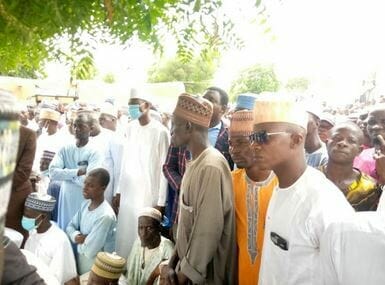 Sokoto State Ministry of Health has in its update on death of the entire household as a result of food poisoning in DANZANKE village of BARGAJA Ward of Isa Local Government that the only two surviving members of the household are still in Hospital under intensive care.

Commissioner of health, Dr. Ali Inname confirmed that the death of the 24 people of the same compound was as a result of mistaken identity, in which the victims mistake Urea fertilizer for salt (Dan Karki or Gishirin Lalle) in Hausa.

He said the family of 24 who had the ill-fated meal lost their lives, except two female members, saying that the two only tested the meal but are currently under intensive treatment, with a strong chance of survival.

According the commissioner, attempts to save the lives of the affected 24 people proved abortive as the state government has deployed all expertise needed for them to survive medically all to no avail.

The state government cautioned citizens to avoid the use of adulterated food not only salt with a view to prevent re-occurrence of the unfortunate incidence in their family, as experienced in Sokoto State and neighboring Zamfara state earlier this year.

It is very important for the public to note that the incidence is preventable and not contagious, but extremely fatal even with the best of medical attention and care, Inname averred.

According to him the state government is closely monitoring the situation and would ensure all food items and other chemicals if any in its warehouses, are separated.

“We will double check all ingredients and food stuff at our disposals before granting them to the public as palliatives, ” Inname said.

We also hope to commence sensitization of the general public on the use of pesticides and other chemicals in the storage of Beans and other raw food items.