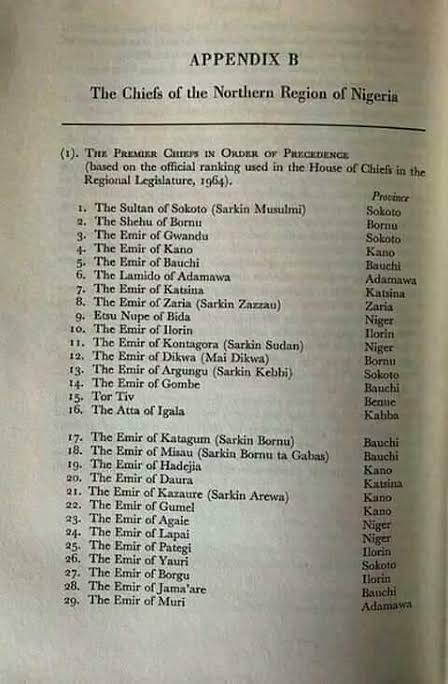 Fast forward to July, 2021 when the Emir of Muri also in Taraba State, when Abbas Tafida went ballistic.

Who is this Emir of Muri?

He is a religiously Hausanized “Fulbe Si’re”. Meanwhile, those he is negatively profiling, openly intimidating and threatening to exterminate in his domain are the stubbornly traditional and animist “Fulbe Na’i” – what ethnicity has joined together has been put asunder by economic class.

At the Second Meeting of the First Session of the Northern Nigeria Legislative House of Chiefs that took place between March, 20-26 1957 an “order of precedence” was created. As can be clearly seen the list features the Emir of Muri at number 29.

Muri is substantially Mumuye, Wurkum and Jukun territories that was a French possession before the British under the auspices of the Royal Niger Company took it over.

Before then, “by 1817, Hamman Ruwa, a brother of the Emir of Gombe, an emirate to the north, had consolidated Fulani control over the non-Muslim people of the area and placed his territory under Gombe’s jurisdiction.

After Ruwa was put to death in 1833 by Gombe’s Emir Buba Yero, the Fulani of the region requested independence from Gombe. Thus, founded as an independent emirate in 1833, Muri, which was also known as the Hammaruwa Kingdom, was ruled by Ruwa’s descendants from Muri town (often called Hammaruwa) until 1893.

Throughout this period, the kingdom paid tribute in slaves to Sokoto, the capital of the Fulani empire, 464 miles [747 km] west-northwest.” – Encyclopedia Britannica

In case you are wondering why the North reacted differently to Danjuma and Tafida, the attached “order of precedence” continues overleaf to 51 with the Aku of Wukari, Chiefs of Idoma, Jos, Kagoro, Kabba and Bachama respectively at numbers 39, 41, 42, 47, 48 and 49. The Chiefs of Paiko and Minna (now emirs) conclude the list and 50 and 51.

Simply put, Danjuma belongs to a lesser North – what Arewa has joined together by geography has been put asunder by the “order of precedence” contrived by subterfuge. Lest we forget that the economic prosperity and influence of the erstwhile Sokoto Caliphate was underpinned by serfdom.

Is that psychosis still ingrained to date by other means on Nigeria’s political chess board?

According to Abbas, “Our brothers, the nomadic herdsmen from neighbouring countries, you came to us to allow you stay in our forest. We allowed you because you are our brothers. When you came, we welcomed you?

So, I have given you 30 days to leave my emirate. If we see any one of you after the expiration of my ultimatum, we will kill him. We kill him without asking him what he came to do or ask his name or where he comes from. If we are going to be all killed let it be.

“ We will not allow bastards come and kidnap our wives, take them to the forest and rape them or commit adultery with them.”

Yet according to the Fulani,

“Pulaaku or Laawol Fulɓe is our code of behavior literally meaning the “Fulani pathways” which are passed on by each generation as high moral and social values. This code of behavior or honor enables us to maintain our identity across boundaries and changes of lifestyle. As an instrument of relationship between people, our language also obeys the subtle set of rules of Pulaaku. Essentially viewed as what makes a person a true Fulani, Pulaaku includes:

Gacce: Modesty, respect for others (including foes)

How come we are not seeing any of the foregoing qualities on both sides of the Fulani divide at Muri Emirate?

Elite failure is the fundamental issue at stake. The historic growth, development and expansion of the of the lazy and unimaginative “Si’re” has been inversely proportional to the continued stunting, underdevelopment and degradation of the angry and frustrated “Na’i”.

No doubt, an economic class struggle is going on within the Fulani. It is the collateral damage arising which is manifesting as banditry.

But does the impunity of downing of a NAF jet fighter not portend something much more sinister beyond criminality?

Lest we forget neither during the 30 month long Nigerian Civil War nor ECOMOG interventions in Liberia and Sierra Leone has any of our air combat assets been gunned down.

If the Fulani intelligentsia could not rehabilitate its underclass over the decades, they have been dominating the North is it the rest of Nigeria they will deliver?

Muri Emirate is a microcosm. The relations between the Fulani classes have become dangerously antagonistic because their dominant self-serving, lazy and unimaginative aristocratic and political classes have allowed a wide income disparity with the underclass herders now turned anti-aircraft sharpshooters.

This is not however to say they do not have fundamental points of convergence in the overall context of Nigeria.