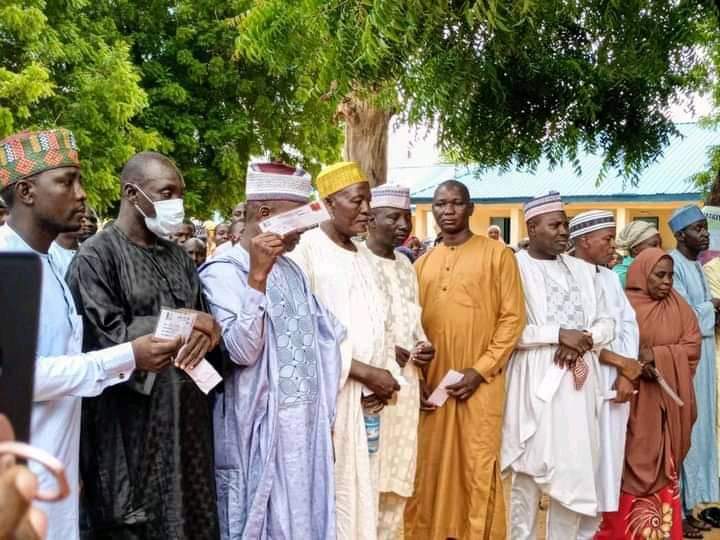 Kebbi State Governor, and Chairman Progressives Governors Forum, Atiku Bagudu has expressed delight with the peaceful conduct of the APC ward congresses across the state.

The governor affirmed his commitment to the efficacy of the consensus strategy as successfully deployed by the party during the exercise.

Addressing party supporters shortly after the affirmation of the APC new wards leaders at Nasarawa 2, his own ward in the State, he said ” History has repeated itself as the party had at several times employed consensus and it worked well in the past.

According to him, he said they are not in any way surprised that the strategy has again became handy to APC in Kebbi state.

He there for lauded all stakeholders who had exhibited commitment towards ensuring the success of the exercise.

The Chairman of Birnin Kebbi Local Government Area, Hon. Aminu Sarkin Fada congratulated the governor for smooth conduct of the congress in his ward.

He called on the ward leaders to remain committed to their responsibilities and enlighten electorates on the new polling units announced by INEC.

In his Remarks, the newly elected ward Chairman of Nasarawa 2, Murtala Umar, expressed appreciation for the confidence reposed on them by people of the ward.

He pledged to carry everybody along and work assiduously with his members for the success of the party.

Meanwhile In his remarks, Dr. Osita Okechukwu, the leader of monitoring committee sent by the National Secretariat of APC commended Governor Bagudu, stakeholders and party members for their cooperation, solidarity and working together for the progress of the party.

Osita Noted that the unity they have witnessed in the state since their arrival shows that Kebbi APC is united and worth emulating.

Adding that President Muhammad Buhari has directed them to build the party from bottom to top, and this is what Kebbi state is doing, and is not possible for the opponents to defeat them,” Osita added.