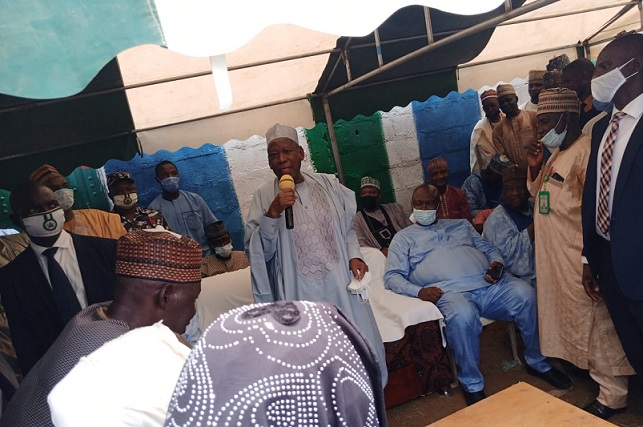 Governor Abdullahi Umar Ganduje of Kano state has allayed fear over the Ward Congress of the ruling All Progressives Congress (APC), explaining that, the perceived legal fear was on Executive not extraordinary Convention and Congress Committees.

“There is no fear. Because the Supreme Court ruling is referring to the Executive of our party at the national level. But we do not have Executive. What we have is Extraordinary Committee on Convention and Congresses all over the country,” he explained.

He made the remarks immediately after the Ward Congress at his Ganduje Ward, in Dawakin Tofa local government, that saw to the affirmation of APC leaders at his ward, Saturday.

Explaining further that, “What we have in place is an ad-hoc committee in charge of making arrangement for Convention and Congresses. Like what we have seen, what is going on now.”

Arguing that, it was not an Executive National Committee of the ruling APC, “…but an extraordinary arrangement in order to ensure peaceful Convention and Congresses of our great party. So, we have no fear at all.”

Specifically, on Kano Ward Congress, governor Ganduje reminded that, they had a meeting when agreement for consensus was reached, he said “We had consensus to that effect. So, we don’t exercise any fear also.”

Responding to some feelings that could come up, he quickly asserted that, “The majority will always have their own and the minority will have their say, anyway. So, there is no way you get a hundred percent consensus.

But then, what you have seen today, there is nobody who raises alarm over how we are peacefully conducting our affirmation exercise today.”

“So those who have complaints, their complaints will be entertained. There is an Appeal Committee, which is coming around. It will listen to those with any complaint,” he disclosed.

The representative of APC National Headquarters, Dr Tony commended the process in the state and urged all those officials to always stick to party’s philosophy.

“I can see that election is conducted, consensus done and affirmation done also. We thank His Excellency the Governor for the process. I am happy to also see women participation in the process,” he appreciated.

In his part the Chairman Congress Committee in Kano, former Speaker, State House of Assembly, Ya’u Abdullahi ‘Yan Shana reveals that, “All the 27 seats in the leadership of the party at Ganduje Ward, all seats were elected through consensus. The consensus was peaceful as I witnessed in all the places I visited today across the state.”

Adding that, “Everywhere we visited there was mass turn out, just as we are seeing here. In all the 27 positions, each position was contested by only one person.

Governor Ganduje finally appreciated and urged that, “We are happy to witness this democratic exercise. This exercise is democracy in action. I also invite you, to be conscious of responsibilities vested in you.”

Anwar is Chief Press Secretary to the Governor of Kano State