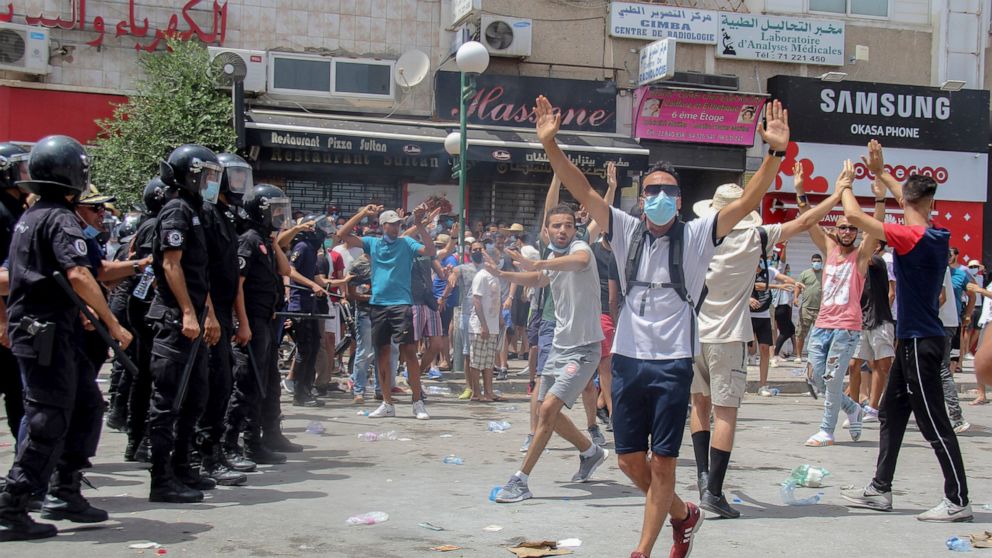 Street clashes erupted on Monday outside Tunisia’s army-barricaded parliament, a day after President Kais Saied ousted the prime minister and suspended the legislature, plunging the young democracy into a constitutional crisis.

Saied sacked Prime Minister Hichem Mechichi and ordered parliament closed for 30 days, a move the biggest political party Ennahdha decried as a “coup”, following a day of angry street protests against the government’s handling of the Covid pandemic.

Soldiers from early Monday blockaded the assembly in Tunis while, outside, the president’s supporters hurled volleys and stones at backers of Ennahdha, whose leader staged a sit-in to protest being barred entry.

Saied’s dramatic move – a decade on from Tunisia’s 2011 revolution, often held up as the Arab Spring’s sole success story – comes even though the constitution enshrines a parliamentary democracy and largely limits presidential powers to security and diplomacy.

It “is a coup d’etat against the revolution and against the constitution,” Ennahdha, which was the biggest party in Tunisia’s ruling coalition, charged in a Facebook post, warning that its members “will defend the revolution”.

The crisis follows prolonged deadlock between the president, the premier and Ennahdha chief Rached Ghannouchi, which has crippled the Covid response as deaths have surged to one of the world’s highest per capita rates.

“I have taken the necessary decisions to save Tunisia, the state and the Tunisian people,” Saied declared in a statement on Sunday, a day that had seen angry Covid street protests in multiple cities.

The president’s announcement sparked jubilant rallies by his supporters. Large crowds took to the streets of the capital late Sunday to celebrate and wave the national flag, as car horns sounded through the night and fireworks lit up the sky.

“Finally some good decisions!” said one Tunis protester, Maher, celebrating in defiance of a coronavirus curfew. Others held up signs with a simple message to the sacked government: “Game Over”.

Before the president’s announcement, thousands had marched in several cities protesting against Ennahdha, criticising the largest party in Tunisia’s fractious government for failures in tackling the pandemic.

A senior Ennahdha official, speaking to AFP on condition of anonymity, alleged that the protests before the president’s announcement, and the subsequent celebrations, had all been choreographed by Saied.

“We are also capable of organising large demonstrations to show the number of Tunisians who are opposed to these decisions,” this official said.

Since Saied was elected president in 2019, he has been locked in a showdown with Mechichi and Ghannouchi, who is also house speaker. The rivalry has blocked ministerial appointments and diverted resources from tackling Tunisia’s many economic and social problems.

“We are navigating the most delicate moments in the history of Tunisia,” Saied said Sunday.

He said the constitution did not allow for the dissolution of parliament, but did allow him to suspend it, citing Article 80 which permits it in case of “imminent danger”.

Saied said he would take over executive power “with the help” of a government, whose new chief will be appointed by the president himself.

He also said that parliamentary immunity would be lifted for deputies.

‘Birth of a dictator’

In the 10 years since the revolution which toppled dictator Zine El Abidine Ben Ali, Tunisia has had nine governments, some of which have lasted only a few months, hindering the reforms necessary to revamp its struggling economy and poor public services.

Tunisia has recently been overwhelmed by Covid-19 cases which have raised the death toll to more than 18,000.

Last week, Mechichi fired his health minister over his handling of the pandemic as cases skyrocketed – the latest in a string of health ministers to be sacked.

Demonstrations were also reported in the towns of Gafsa, Kairouan, Monastir, Sousse and Tozeur.

Several protesters were arrested and a journalist was injured when people hurled stones and police fired tear gas canisters, an AFP reporter said.

“The people want the dissolution of parliament,” the crowd had chanted.

Nahla, brandishing a Tunisian flag, was jubilant and told AFP: “These are courageous decisions – Saied is unblocking Tunisia. This is the president we love!”

But one man, aged in his forties, watched on without enthusiasm and said: “These fools are celebrating the birth of a new dictator.”