COAS at Sallah: Borno Governor Inspires Our Troops at the Front Lines 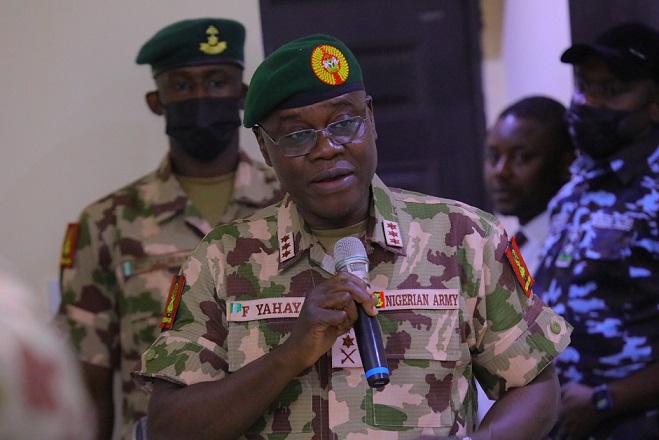 Yahaya stated this at the Government House in Maiduguri on Tuesday when he and the Chief of Air Staff, Air Marshal Isiaka Oladayo, were hosted by Zulum to commemorate the Sallah.

“From your (Zulum’s) visits to troops on the ground many times, even to several isolated and probably not too secured environments, you have always been there. Every time you have gone, it has gingered and boosted our morale, including also all the support you have been providing to our operations and activities.

“We can only thank and appreciate His Excellency, the Executive Governor of Borno State for all the support that he has been providing for us in Operation Hadin Kai and even before when it was Operation Lafiya Dole and all along”, the army chief said.

Governor Zulum thanked the service chiefs and their troops for their sacrifices. He noted continued improvement in the relationship between the military and civilian authorities and urged the military to remain in close collaboration with Borno State government in order to defeat the decade long insurgency in the northeast.

Speaking on behalf of members of the National Assembly, Senator Mohammed Ali Ndume gave assurances of their support to Zulum’s administration in Borno State.

Speaker of Borno State House of Assembly, Abdulkarim Lawan, who spoke on behalf of legislators made assurances of unflinching support, maximum cooperation and a symbiotic working relationship with the Governor towards the attainment of lofty goals.