Menu
Home Columns Biko, who is this Obi Cubana?
Columns 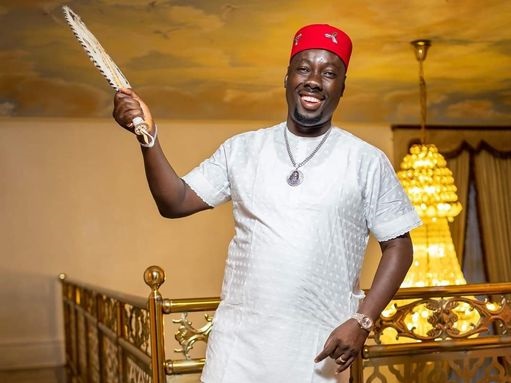 Every man is entitled to his own hustle. That of Obi, a 1975-born Political Science graduate as a showbiz and entertainment industry mogul is obviously a well-paying one. This is not your average “Container anatago high sea” type. He is an impresario with reported tentacles in Naija Hip-Hop and Nollywood.

Anybody who has watched the recent video clips of the late Madam Ezinne Uche Iyiegbu’s burial turned carnival would wonder why the South East is always screaming, “Marginalization” when they have a retinue of homeboys that can stone each other with hard currency?

Let the truth be told, nobody has ever done a better public relations job for the Ndi Igbo like Prof. Ali Al’amin Mazrui (1933-2014) in Episode 5 of the multiple award-winning, “The Africans: A Triple Heritage” jointly produced by BBC and NTA in the early 1980s.

Obi Cubana like most of his commercially dexterous kinsmen recently at Oba in Idemili South of Anambra State have shown us in various ways they have really “hammered”. This is bareface ” oppression” but anybody who can receive a “Ruga” full of nearly 300 cows as contribution from friends and associates for his mum’s burial must have touched lives.

But as the sage Chinua Achebe in retrospect noted in his must read; The Trouble with Nigeria (1984);

“This kind of success can carry a deadly penalty: the danger of hubris, over-weening pride and thoughtlessness, which invites envy and hatred, or even worse, which can obsess the mind with material success and dispose it to all kinds of crude showiness.”

What is the root cause of the Igbo marketplace success?

“The Igbo apprentice system is an extension of their entrepreneurial spirit where an induction strategy is utilised to induct mostly young Igbos into entrepreneurial ventures by established entrepreneurs locally referred to as Oga.

This venture can be a trade, an enterprise or a vocation, in some cases serving also as a domestic help. The Ogas are former apprentices that had served and were handed resources to begin their own enterprises. This system is informal and has unstructured training programs to learn and master skills required to embark on own enterprise.

No doubt, this system is deeply rooted and inspired by Mosaic Law. It is an ancient poverty alleviation program that seeks to maintain a healthy gap between Haves and Have-nots in any community. This not only serves as an achievement motivation catalyst but acts as a stabilizing factor. It also guarantees a steady flow of opportunity through the dint of hardwork and patient longsuffering.

It is a laudable obedience to God’s commandment. That is why it is often said that if you go to any nook or cranny of Nigeria indeed anywhere in the world and there is no Igbo presence – “No bi beta place”

However, with all due respect, the Ndi Igbo have woefully failed to convert their commercial dexterity to political acumen.

Has Nigeria been fair to Ndi Igbo?

I still have in my modest archives a copy of, “Ohaneze Ndigbo: A Call for Reparations and Appropriate Restitution. A Petition to the Human Rights Violations Investigation Commission for and on Behalf of the Entire Ndigbo (October, 1999)”

That notwithstanding, less than 10 years after the Igbos were variously Nigeria’s Numbers 2 and 4 during the Second Republic. Back to back before then, Rear Admiral Godwin Ndubuisi Kanu (1943-2021) and Commodore Ebitu Okoh Ukiwe were military governors of Lagos State under the General Obasanjo led junta.

The Igbo have also had their “turn” as Army, Air and Naval chiefs including CDS.

“If your brother, a Hebrew man, or a Hebrew woman, is sold to you and serves you six years, then in the seventh year you shall let him go free from you, you shall not let him go empty- handed; you supply him liberally from your flock, from your threshing floor, and from your winepress.

From what the LORD your God has blessed you with, you shall give to him.

You shall remember that you were a slave in the land of Egypt, and the LORD your God redeemed you; therefore, I command you this thing today.”

COAS at Sallah: Borno Governor Inspires Our Troops at the Front Lines