Menu
Home Sports Time to Rumble in the Ring
Sports

Time to Rumble in the Ring 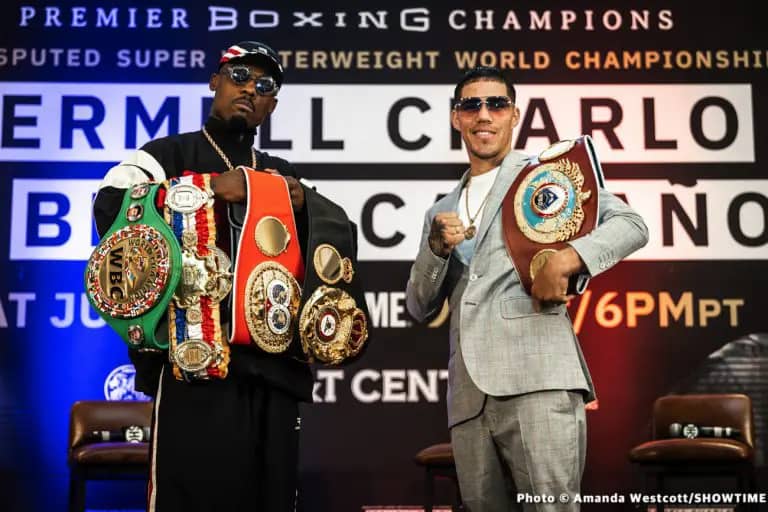 Tonight, live on SHOWTIME, from the AT&T Centre in San Antonio, Jermell Charlo and Brian Castaño battle for the undisputed 154-pound championship. Boxing is more of an individual challenge. Cristiano Ronaldo has ten teammates that he can pass the ball to when things get tough, but when in the ring every boxer is on his own.

SHOWTIME CHAMPIONSHIP BOXING begins at 9 p.m. ET/6 p.m. PT and will see the hard-hitting unified champion Charlo and the exciting Argentine Castaño go toe-to-toe as all of the super welterweight championship belts are on the line for the first time in the four-belt era.

It has been confirmed that the heavyweight trilogy showdown between WBC and lineal world champion Tyson “The Gypsy King” Fury and former world champion Deontay “The Bronze Bomber” Wilder was scheduled for Saturday, July 24 at T-Mobile Arena in Las Vegas has gotten a new date. Remember the bout was postponed due to Fury’s positive COVID-19 diagnosis.

The two goliaths will now meet Saturday, Oct. 9 at T-Mobile Arena and live on ESPN+ PPV and FOX Sports PPV, resuming one of the great rivalries in the division’s storied history.

Wilder is with his new trainer Malik Scott, and those two appear to be making excellent progress working out and tinkering with his fighting style. If Fury is assuming that he’ll be seeing the same Wilder as he did in the first two contests, he could be sourly mistaken.

This is going to be an altogether new Wilder, capable of moving around the ring and showing a different side of his game that Fury has yet to see.

If Fury loses this fight, he will have to wait a long while before he gets a fourth contest with Wilder. The Bronze Bomber will be looking to challenge the winner of the September 25th fight between Anthony Joshua and Oleksandr Usyk.

Xu Can will defend his WBA Featherweight World Title against Leigh Wood on the first week of Matchroom Fight Camp in Brentwood, Essex on Saturday July 31, live worldwide on DAZN.

Can (18-2, 3 KOs), who is recognised by The Ring Magazine as the No.3 Featherweight in the world, won China’s first ever WBA World Title when he defeated Puerto Rico’s defending Champion Jesus Rojas with a unanimous decision at the Toyota Center, Houston, in January 2019.

The ‘Monster’ as he is called created history by becoming China’s youngest ever World Champion, and just the third from the country to win a World Title, with scores of 117-111, 116-112 and 118-110 over Rjoas, in what was his second appearance as a pro in the U.S.

He successfully defended his WBA crown at the first attempt by stopping Japan’s former Super-Bantamweight World Champion Shun Kubo in six rounds in his hometown of Fuzhou in May 2019. Can made the most of his hero’s welcome, flooring Kubo in round five before ending the contest in the next round.

Can’s all-action style was on full display in his next Title defence as he threw 1,562 punches on route to inflicting a first loss on Manny Robles III at the Fantasy Springs Resort Casino in Indio, California, impressively outworking and breaking down Robles over 12 rounds to earn a unanimous decision.

Can vs. Wood is part of a huge night of boxing as Fight Camp returns with a bang, Welterweight star Conor Benn (18-0, 12 KOs) puts his WBA Continental Title on the line against Mexico’s Adrian Grandos (21-8-3, 15 KOs) following his sensational first round KO win over Samuel Vargas, Tommy McCarthy (18-2, 9 KOs) and Chris Billam-Smith (12-1, 10 KOs) collide in a huge showdown for the European, British and Commonwealth Cruiserweight Titles.