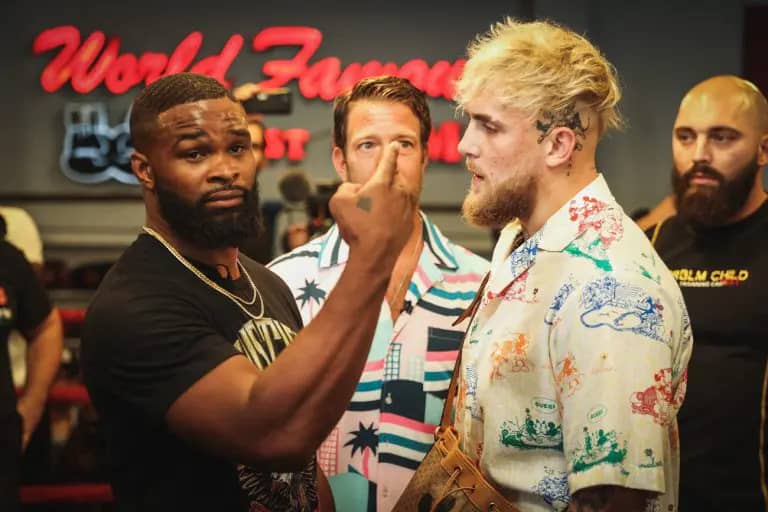 The superstar and professional boxer Jake “The Problem Child” Paul will take on the toughest test of his burgeoning boxing career when he squares off against former UFC champion Tyron “The Chosen One” Woodley in the main event of a professional boxing event on Sunday, August 29 at Rocket Mortgage FieldHouse in Cleveland, Ohio, live on SHOWTIME PPV.

Paul continues to step-up the caliber of his competition against Woodley, a decorated mixed martial arts champion and striking specialist who held the UFC title from 2016 to 2019. On Sunday, August 29, Paul will look to thrill his legions of fans and silence his critics in front of his hometown Cleveland crowd in the eight-round cruiserweight main event, which will be contested at a 190-pound catchweight.

The special Sunday night event is produced and presented by Most Valuable Promotions and SHOWTIME PPV. The pay-per-view telecast, which begins live at 8 p.m. ET/5 p.m. PT is produced and distributed by SHOWTIME PPV. It will feature an undercard complete with high-stakes, professional boxing showdowns including Puerto Rican star and WBC/WBO Featherweight World Champion Amanda “The Real Deal” Serrano defending her titles against super bantamweight world champion Yamileth Mercado.

More on boxing updates, Caleb Plant posted on Instagram on Monday in what appears to be a response to Canelo Alvarez’s earlier post today about him being “back in the gym” to start training for his next fight in September. IBF super middleweight champion Plant then posted this comment: “Been in the gym.”

What this means is pretty obvious at this point. This is a clear signal that the negotiations between Canelo (56-1-2, 38 KOs) and Plant (21-0, 12 KOs) are done for all intents and purposes for a fight on September 11th or 18th for the undisputed 168-lb championship.

Hopefully, for Canelo and his promoters at Matchroom Boxing’s sake, they didn’t get stuck overpaying Plant for his WBO super middleweight belt.

That’s the only thing Plant brings to the table for this fight. He’s not popular, well known, and his resume is filled with obscure opposition. Plant reportedly wanted $10 million+ for the fight, more than Canelo’s past 168-lb opponents Callum Smith and Billy Joe Saunders received. Smith got $6 million and Saunders $8 million.

It was believed that Plant would be offered between $6-8 million. $6 million would be a fair deal, given that Plant isn’t a big star in the U.S and has never beaten anyone talented.

I mean, former two-time WBC super-middleweight champion David Benavidez has consistently called Plant out and gotten nowhere. Plant wants to sit and wait and nurse an injury he sustained last January in his last fight against 38-year-old Caleb Truax.

But with Plant posting today, it’s possible that Canelo agreed to give him the $10 million that he was asking for. Canelo REALLY wants Plant’s WBO strap, and he might not care that he’s overpaying for it.