Our Stand on Violent Separatist Movements in Nigeria – NOSACOF 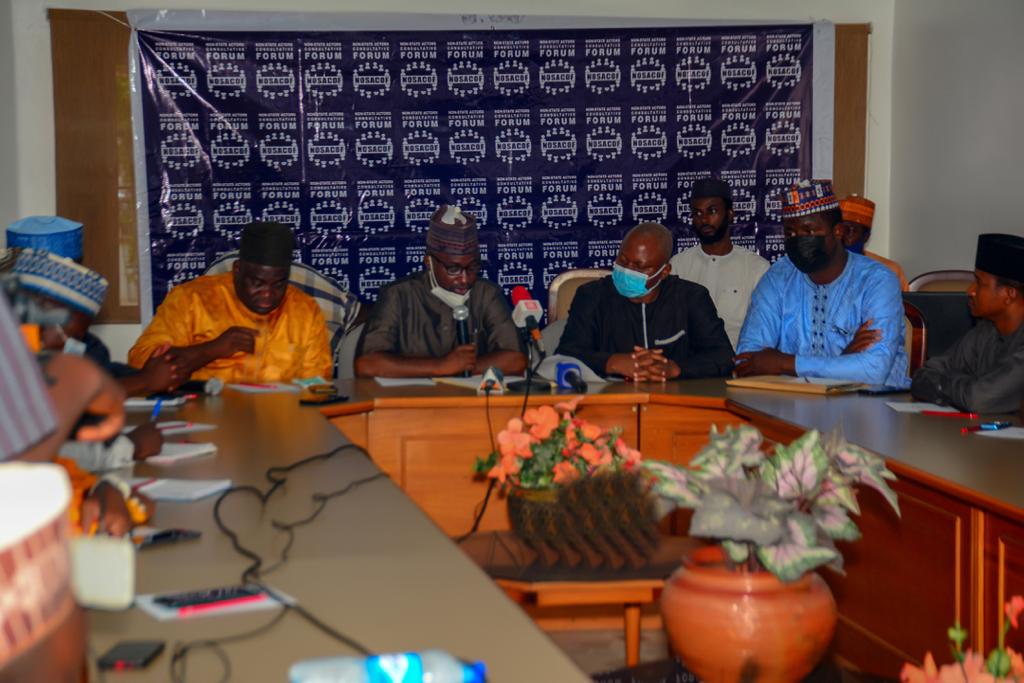 The Non-state Actors Consultative Forum in a signed statement on Tuesday in Kano made its stands clear on the violent separatist movements in Nigeria.

According to the statement that is jointly signed by the forum chapters in Kano, Katsina, Zamfara, Imo, Kaduna, Niger, Sokoto, Kogi and FCT, the efforts of the Attorney General of Federation, Abubakar Malami (SAN) in the arrest and repatriation of Nnamdi Kanu deserves commendation from all Nigerians.

The forum also commended the DSS for the move against Sunday Igboho that thwarted his plans of launching violence against innocent people of a particular ethnicity.

Recent arrest and extradition of the fugitive Nnamdi Kanu, (leader of the secessionist group Indigenous People of Biafra – IPOB) and the raid on the house of Yoruba secessionist Sunday Igboho have stirred a lot of dust in the Nigerian political sphere.

Various political actors and interest groups have used this opportunity to express their opinion and interest regarding such actions. While every Nigerian have the constituted right to express his opinion, it is however disappointing to see some non-state actors, interest groups, politicians and tribal leaders unjustly criticizing our security agencies (especially the DSS) and expressing all sort of unpatriotic statements capable of undermining the security and unity of our dear country.

Most of these actors have consistently shown little to no interest whenever these criminals are perpetrating crimes against the Nigerian state but would always suddenly develop and express support and sympathy towards these violent secessionist elements whenever the security agencies move against them in the interest of peace and national unity.

To these actors everything is politics, and that they have to criticize and oppose every action sanctioned by government for which they are not part.

In the case of Nmandi Kanu, Nigerians are well aware of the charges of terrorism and illegal possession and importation of firearms against him, and how he violated all the terms of his bail and later jump bail only to continue instigating violence against the Nigerian state from abroad.

His actions have resulted in the killing of civilians, military and paramilitary personnel, police forces and destruction of civil institution by the Eastern Security Network (ESN) an arm wing of his organization. No sane government will allow a fugitive like Kanu to destabilize its country of over 200 million people.

It is on record that Kanu have on many occasions promises to destroy Nigeria as he referred to the country as a Zoo, he has even threatened to deal with and even kill political leaders who attempt to condemn his actions and that of members. Recently in one of his propaganda video dated 22/04/2021 he was quoted saying the following;

“all the animals in the Zoo will be destroyed, this is a promise and a pledge we are making to them”,

“If you see Army and police in your village, kill all of them, they are murderers and killers. Kill them”.

“This man (Governor Ikpeazu) is still alive and that is why he is still talking; now we shall take the war to him in Abia State…, I can assure you of that… and this very man we are going to find him not just him and his family, we will find his children wherever they are in the world”

“Wike is no longer sleeping in Government house; he is running from one barrack, I will find him as well”

These are just some of his most recent threats against Nigeria and Nigerians.

The outstanding expertise and professionalism shown by the Nigerian Intelligent Agency (NIA) and Department of State Service (DSS) in collaboration with International Intelligent Agencies which resulted in the arrest and repatriation of Nnamdi Kanu should make every peace-loving Nigeria proud of our security establishments. This will go a long way in earning the international respect they deserve, motivate security personnel and will serve as warning to other people who intend to toe the path of Kanu.

It is imperative that Nigerians should support and stand by our security agencies, as that will significantly help in solving a lot the security problems bedeviling our country.

The role played by the Attorney General of federation Abubakar Malami (SAN) in ensuring adherence to all the necessary international legal protocols in the arrest and repatriation of Kanu deserves commendation from all Nigerians.

Similarly, the action taken by DSS against the secessionist Sunday Igboho is welcome development. The raid found stockpiles of weapons which the secessionist intends to use to unleash mayhem and violence against Nigerians.

The move by DSS against Igboho came at the right time as it has thwarted his plans of launching violence against innocent people of a particular ethnicity. He is now into hiding against arrest by the Nigerian security agency, knowing fully well of the established evidences that will work against him in court of law.

In one of his video which could be found online Igboho can be quoted saying:

“For those that don’t own a gun I am saying it, video me contribute money for them and buy gun for them, they don’t know where to get it, I will help buy guns for them”

“don’t you see that the movement we made some days back, we gave you how we destroyed the village, we gave you a detail on how we went into the forest, but those we captured there we couldn’t give you that”

If Nigeria is to win the fight against insecurity and terrorism, Nigerians need not to be distracted by agents of doom but should support the government and its security agencies to bring the current insecurity challenges to an end.

No country can win this fight against insecurity without the support of its citizens!!!