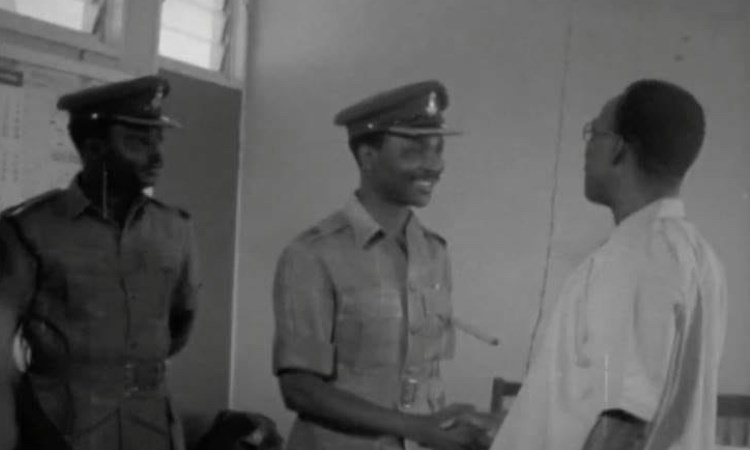 The drumbeats of separatism are sounding increasingly too alarming. To keep the Nigerian ship afloat we need supreme rationality. Including political wisdom by those who can help stabilize our polity.

Where are the elder statesmen of today?

During his time, Chief Obafemi Awolowo (1907-1987) was always available. It is against that background I find these throwback pictures, 21 years apart at the same venue instructive.

The first picture was taken on August 3, 1966 at Dodan Barracks. This was just 2 days after Lt. Col. Murtala Mohammed (1938-1976) had grudgingly agreed to step down for Lt. Col. Yakubu Gowon. From July 29 to August 1, back then there was no substantive Head of State and Commander in Chief as the haggling over the future of Nigeria continued between the military constituencies of the core North and the Middle Belt.

Both appointments were made over and above other more senior officers from the South then still in service. Ironsi needed to placate the North to stabilize his junta.

Therefore, both of them receiving Awo at Dodan Barracks shortly after the Chief’s release from Calabar prison was a political masterstroke.

First, it was to show the North was on the same page despite a power tussle, second to placate the Western Region from contemplating succession and third, to recruit Awo build a bridge across to the recalcitrant Military Governor of the erstwhile Eastern Region, Lt. Col. Chukwuemeka Ojukwu. The backdrop was that Ironsi had completely ignored Awo’s letter dated March 28, 1966 pleading for pardon.

The second picture also in Dodan Barracks was taken on March 9, 1987. The Chief and his “jewel of inestimable value” had dropped by to welcome back IBB who had returned from a medical procedure known as Radiculopathy on March 4. IBB had left for Paris on February 4, two days after he had set up a 13-member National Question panel to chart a political future for Nigeria. But actually to keep Nigerians busy doing what we do best – talking.

Exactly a year before on February 5, 1986, Major General Mamman Vatsa and 9 others were executed by firing squad. That alleged plot uncovered when IBB was less than 6 months in power was a major destabilizing factor. The military president was therefore desperately shopping for political leverage to not only change the narrative but steady his fledgling government.

Anyway, the next day on February 6 was Awo’s 77th birthday when IBB openly described the Chief as “the main issue in Nigerian politics”. I vividly recall the ceremony became a national event.

IBB’s romance with the South West had started during the Second Republic when as army Director of Staff Duties and Plans, he recruited the infamous “Lagos-Ibadan axis of the Nigerian press” to undermine the President Shagari administration with negative profiling to soften the ground for its overthrow. He would then deploy the same regional missile against the Buhari-Idiagbon junta. In both scenarios the political cooperation of Awo might have been through proxy sought by the Minna fox.

Why was Mrs. Hannah Awolowo on the delegation to see IBB? The Niger State capital city hilltop oracle has always been a keen observer of events even as a junior officer. He was perhaps not unaware of her influence over the sage.

In retrospect, General Gowon would declare after her demise in October 2015, “What people may not know is that it was through Mama that I was able get the services of Awolowo to join the government at that time and to be the Vice Chairman of our Executive Council and the Minister for Finance and we all knew what he did to ensure that we are able to survive as a nation during those two and a half years of crisis.

I will always thank her for that because if we had not approached her to prevail on Papa to join the government probably he may not have.”

Indeed what people did not know might have been very familiar to IBB who as a supreme opportunist used the Awolowos for maximum political leverage until things fell apart over June 12. But while it lasted IBB never minded the South West appellation of “Badamosi” fondly shown towards him as long as it served his purposes.

Power is an unpredictable game. But it has its discernable rhythms and patterns. With sudden ups and distruptive downs including all manners of unintended consequences.

At precarious intersections however, recruiting great men that have credibility and are influential in times of political need is very crucial in keeping afloat.