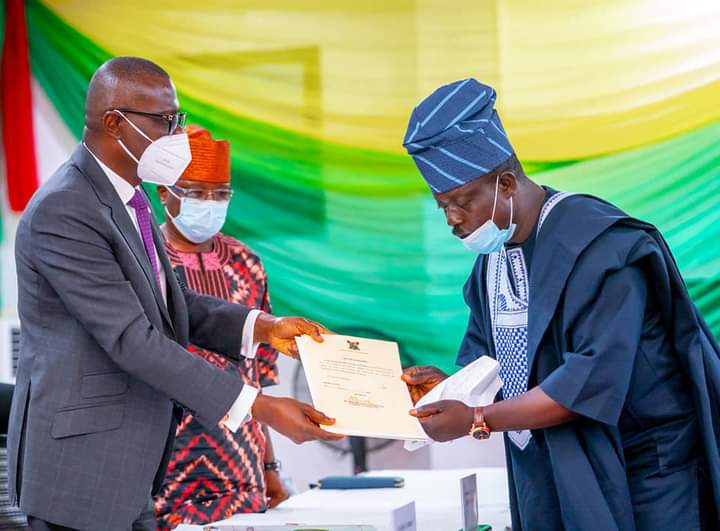 Speaking during the swearing-in ceremony of Agunbiade held at the Lagos House, Ikeja on Thursday, Governor Sanwo-Olu urged the new chairman to ensure a successful end of the tenure of his predecessor.

He also charged him to work with the leadership of the ruling party, All Progressives Congress (APC) at state and local government levels to secure total victory for the party in the July 24 council elections.

Agunbiade, a former Vice Chairman of Eti-Osa East LCDA became the new council boss following the demise of the immediate past Chairman, Hon. Olufunmi Olatunji, who died on Monday June 21.

Governor Sanwo-Olu while stressing the need for continuity of good governance in Eti-Osa East LCDA, urged Agunbiade as vice to Olatunji to carry on with the good works that the former chairman started in the council.

He said: “I want to congratulate you, Hon. Biliaminu Samson Agunbiade on this occasion marking the formal transfer of mandate of leadership of Eti-Osa East Local Council Development Area to you. This event is taking place barely 15 days to the local government elections. I have listened to you and I have heard your commitment at ensuring that come July 24, you will do everything within your power to ensure that our party, APC becomes successful at the forthcoming elections.

“Your major responsibility therefore is to ensure a successful end of the tenure and more importantly, work together with the leadership of our party both at the State and Local Government levels to secure total victory for our party on July 24, 2021 as a befitting tribute to the memory of Hon. Abdul-Rafiu Olufunmi Olatunji.”

Speaking on the former chairman, Governor Sanwo-Olu, who observed a minute silence in honour of the deceased, described the late Olufunmi Olatunji as energetic, competent, illustrious son and one of our shinning beacons in Eti-Osa.

“I know him (Olatunji) personally. I know he was one of our shinning beacons. His death was quite painful, occurring at the twilight of his first tenure of four years and on the verge of securing another term, having won the primary election to contest the July 24 local government election on the platform of our great party. We commiserate with his family and the good people of Eti-Osa East Local Council Development Area. May his gentle soul continue to rest in peace.”

Giving a vote of assurance, Hon. Agunbiade, who described his emergence as Chairman of Eti-Osa East LCDA as divine and will of God, assured Governor Sanwo-Olu that he would continue where his predecessor stopped.

“I promise to discharge my duties and to abide by the rules and regulations and also our party manifesto. I am going to pick it up from where my chairman stopped and I assure you that I am going to deliver my local government to our party, APC come July 24 Local Government elections. We will also protect the lives and property of our indigenes and non-indigenes across the local government.