A Good Day to Box 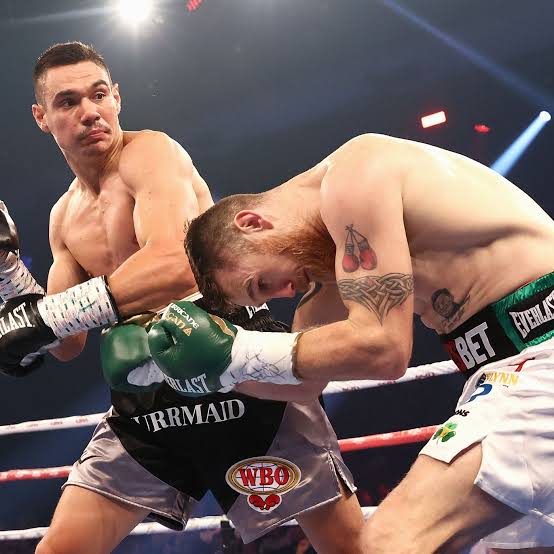 At the end of the first round, an overhand right from Tszyu on the head rocked Spark. In the second round, both fighters had marks under their right eyes.

In the co-feature, Super Feather Liam Nelson was stopped by WBO Asia Pacific champion Joe “Jaw Breaker” Noynay. In the other co-feature, WBO Asia Pacific champ southpaw Joe “Jaw Breaker” Noynay, stopped Liam Wilson, 9-1 (6), of Caboolture, Queensland, AUST, at the fifth in a 10. In the fourth round, Wilson was driven into the ropes and down by a Noynay left on the chin.

In the fifth round, Noynay had Wilson’s nose bleeding near the end of the round. Wilson landed a right on the chin with Noynay coming back with a pair of left’s to the body (the second low), then landing a left on the chin knocking Wilson to the canvas, causing referee Phil Austin to call a halt.

In a rematch, IBO Int’l Super Welter champ southpaw Wade “Mayo” Ryan, of Gunnedah, New South Wales, AUST, stopped Troy O’Meley, of Newcastle, New South Wales, AUST, at the conclusion of the sixth round of a 10. In the fifth round, Ryan landed a left opening a cut between the eyes on the forehead, dropping O’Meley for an 8-count. In the sixth round, Ryan continued outworking the tough O’Meley, and the latter’s corner wouldn’t allow him to continue at the end of the round.

Returning after six years Welterweight southpaw Sam Ah See, 14-0-1 (7), of Orange, New South Wales, AUST, stopped southpaw Czar “Czar of Bohol” Amonsot, 35-6-3 (22), of Bogo, Cebu, PH, at the first of an 8. In the first round, Ah See rocked Amonsot with a left uppercut on the chin, following up with a flurry dropped him for an 8-count. Upon rising, Amonsot was jumped on by Ah See, causing referee Will Soulos to call a halt

Yesterday, Gilberto “Zurdo” Ramirez (41-0, 27 KOs) and Sullivan Barrera (22-3, 14 KOs) hosted their final press conference today at Banc of California Stadium, home of their July 9 fight which will be streamed live on DAZN. They were joined by several members of the undercard, including Joseph Diaz Jr. (31-1-1, 15 KOs) and Seniesa Estrada (20-0, 8 KOs).

Have a triumphant day.