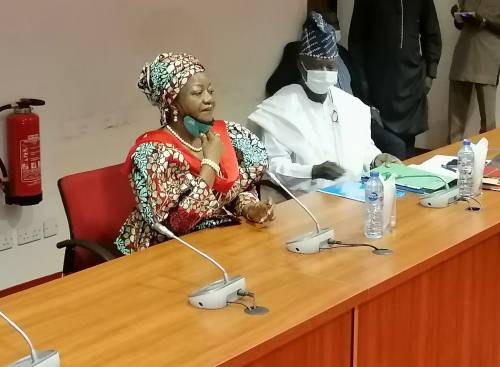 The Senate Committee on Independent National Electoral Commission (INEC) has begun screening of the Special Assistant to the President Muhammadu Buhari on Social Media, Lauretta Onochie, and other nominees for appointment as National Commissioners.

President Buhari, last month, wrote the upper legislative chamber of the National Assembly to, for a second time, confirm the nomination of his personal assistant on social media into an influential INEC position.

Onochie is a very vocal member of the All Progressives Congress (APC) and has been deeply involved in the party’s internal activities in the past, making her unsuitable to occupy a position that demands non-partisanship.

The nomination has been met with stinging public criticism with numerous petitions submitted against her appointment.

In June, Uche Secondus, National Chairman of the PDP, led a protest to the National Assembly, Abuja over the nomination of Lauretta Onochie, as National Commissioner of the INEC representing the South-South.

Chairman of the Senate Committee on INEC, Senator Kabiru Gaya, said in a televised interview on Tuesday, July 6, 2021, that Onochie will finally be screened on Thursday, July 8, alongside five others.

He said the petitions submitted against nominees will be seriously scrutinized and that the committee will make its decision based on what the law says.

“We will look at the petitions. When they have grounds, then we use the petition; but where the grounds are not strong enough, we may only do what is right,” he said.

Onochie’s nomination will be confirmed or rejected when the committee submits a report on the floor of the Senate next week when a report on the Electoral Act Amendment Bill will also be presented, Gaya said.