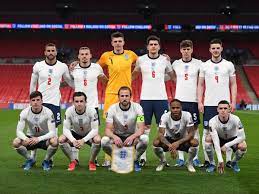 England – Denmark will be an epic EURO 2020 semifinal at Wembley on Wednesday, as the Three Lions aim to ride home support to reach a first major final since 1966.

Gareth Southgate has some big selections dilemmas facing him as the Three Lions have been rock solid defensively but have so many good options in attack, as we saw in their big win against Ukraine last time out.

Denmark are the underdogs against England, but many will fancy them to cause an upset as Kasper Hjulmand’s side ride a wave of unity following the horrific scenes in their opening EURO 2020 game when Christian Eriksen suffered a cardiac arrest on the pitch.

With Eriksen now recovering after surgery and cheering his side on from afar, there’s a feeling of destiny about this Denmark side. However, there’s no doubting England have the better individual players and are also in very good form heading into this massive semifinal.

Below is a look at my projected England starting lineup against Denmark, with formations, personnel and substitutes (extremely key) all up in the air.

Everybody is fully fit after Bukayo Saka has recovered from a small ankle issue and Southgate has no suspension issues either.

After their 4-0 shellacking of Ukraine, Southgate was also given the luxury of resting key players and allowing his young side to prepare for the Denmark game early.

Jordan Pickford has been one of the stars of the tournament as he’s yet to concede a goal, while three of the back four picks itself. John Stones, Harry Maguire and Luke Shaw will definitely start, but it’s all about who will start at right back. It would appear that Kieran Trippier could start over Kyle Walker (who has had a few shaky moments) at right back against Denmark. Trippier is lauded as an epic one-on-one defender and the threat of Joakim Maehle down Denmark’s left from a wing-back position is big enough to consider bringing in Trippier.

England could switch to a 3-4-3 system, just like they did against Germany, and if they did that then Trippier could start at right wing-back and Walker would slot in as one of the three center backs with a central attacking midfield sacrificed. The best thing about this England side is that they’re so flexible tactically and can switch between a back four and three within games.

In central midfield Declan Rice and Kalvin Phillips are nailed on to start (with Jordan Henderson waiting to come on), while there is an intense battle between Jack Grealish, Phil Foden and Mason Mount to start in the No. 10 role. With Grealish rested totally for the win against Ukraine, you get the sense he will get the nod against Denmark.

Up top, red-hot Harry Kane has found his form and will lead the line, while in-form Raheem Sterling has been sensational this tournament and will start on the left. That leaves the right wing spot up for grabs and if Saka is fully fit, he will likely start. That is because his pace on one side, and Sterling’s on the other, will give Denmark’s towering back three of Kjaer, Christensen and Vestergaard all kinds of problems.

If that doesn’t work, Southgate will still have Mount, Jadon Sancho, Foden and others on the bench to try and force it. Talk about options…