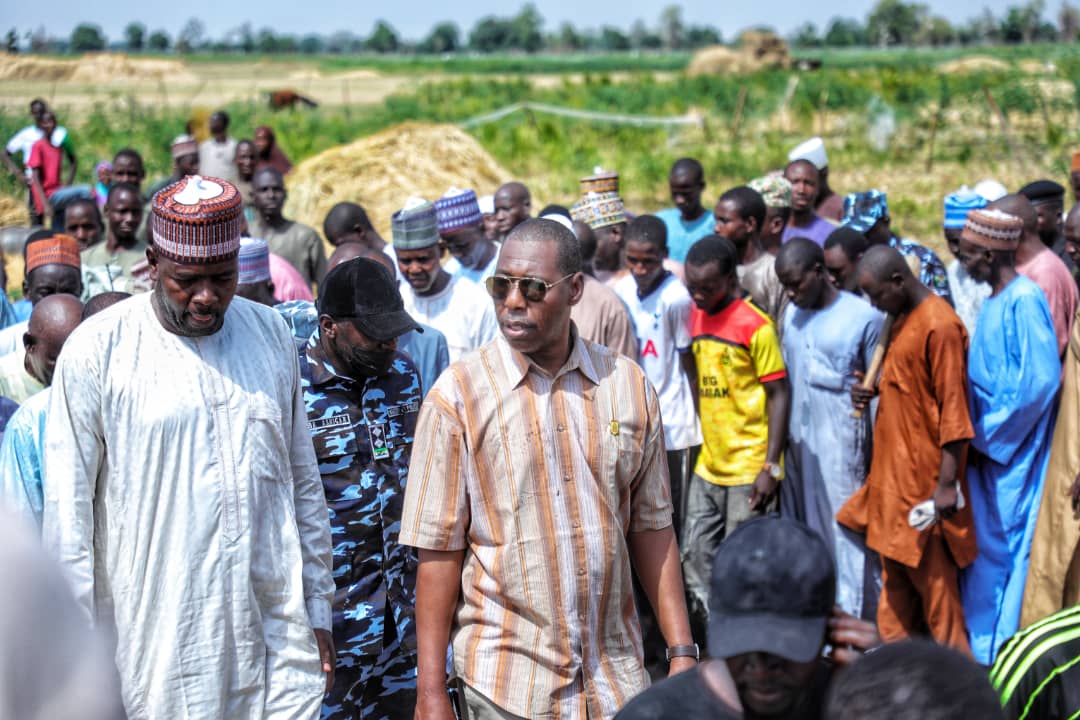 Borno State Governor, Babagana Umara Zulum was on Monday in Damasak, headquarters of Mobbar Local Government Area in the fringes of the Lake Chad in Northern Borno.

Zulum, during the visit, directed the profiling of 3,000 families to be provided with packages of inputs that would include improved seeds, fertilizer, water pumps and chemicals to safely return to farms that will be secured by the Nigerian military.

In January 2021, Zulum, in Damasak, had supervised the distribution of seeds, fertilizer, chemicals, water pumps and N5,000 to each of 1,200 irrigation farmers many of whom are harvesting crops such as onions, rice and pepper.

In his Monday visit, the governor was in the farms to assess progress made by the 1,200 irrigations, about which he said he was impressed by what he saw.

“Earlier this year, we were here to support some of our farmers in the first phase. In this second phase, we will profile 3,000 families from those that did not benefit and we shall support them for both irrigation and rain fed farming. The 3,000 households to benefit will translate to about 20,000 or less persons benefitting from the scheme,” Zulum said.

The governor said he expected the 3,000 families to safely cultivate crops in hundreds of hectares of land like those used by the first batch of farmers to cultivate rice, pepper and onions through the state government’s start-up packages.

Zulum commended the farming families for their commitment to agriculture which resulted in bumper harvest recorded in Damasak.

The governor pledged to render more support to enhance socio-economic activities in the town.

“I am happy with what I have seen here, you have done a very good job. Food security remains critical to our administration, we must do everything for our people to continually engage in agricultural activities to sustain food security to the citizens,” Zulum said.

Damasak, which was famous for massive agriculture, had farming activities suspended for nearly six years following Boko Haram’s occupation in 2014; a situation that threatened food security in the area.

“Let me commend the Nigerian military, the police and other paramilitary forces for their unprecedented support to our farmers. They allowed our farmer to safely go to their farmlands and return within stipulated time. To the Chief of Army Staff, the theatre commander and all principal officers, we remain eternally grateful to all of them as they steadily implement the directive of Mr President that the military should secure safe farming in Borno,” Zulum said.

The governor was accompanied to Damasak by the member representing Mobbar LGA at the Borno State House of Assembly, Usman Lawan Moruma, and the state’s Commissioner for riculture, Engr. Bukar Talba.