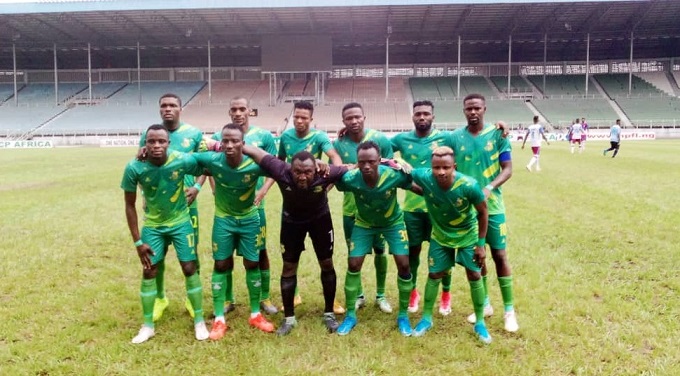 Kano Pillars Fc loss the encounter by 2-1 in a highly contested game played by both team.

MFM Fc took the lead through its attacker Toyin O. after a Kanp Pillars Fc (sai masu gida0 defensive error in the sixteen minutes of the game.

Also, a rightful back of the home side by Ade Yinka scored the second goal at sixty-four minutes to complete the job.

sai masu gida were unlucky to take a draw in the match despite the two penalties they get in the match at eighty and eighty-seven minutes of play which Rabi’u Ali aka Pele converted one and missed one.

In his post-match reaction, Kano Pillars Fc Acting Technical Adviser, Ibrahim A. Musa said his players well but the God of soccer is not on their side.

Coach Ibrahim expressed worried on how his players are outplaying most of the teams they meet this season but to score a goal is a problem which he said it’s necessary for his crew and players to sit down and come out with lasting solution of this problem.

“In football all outstanding performances you played without scoring or winning the game is useless, because to win is the most important issue of consideration,” Coach Ibrahim said.

He said they would continue searching in the remaining eight matches to rounded up the league and reaffirmed that they would not disappoint people and government of Kano state at the end of the season.

He explained that they were in Lagos with mission of collecting maximum points but Man proposes, God disposes…. the will of God is the best.

With this result Kano Pillars Fc maintain their third position in the table with fifty-two points in the thirty matches they played so far.

Why Nigerians must be MAD