Menu
Home Columns Between a Bow-Tie and the Turban
Columns

Between a Bow-Tie and the Turban 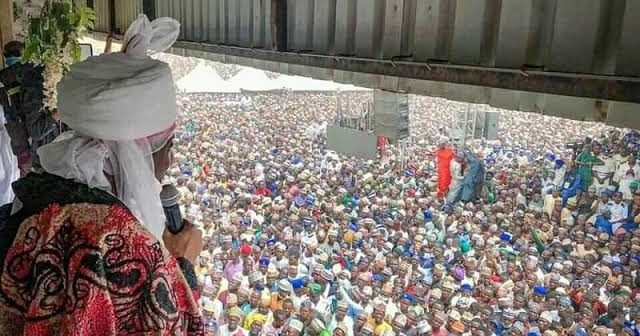 Ahead to the first anniversary of his dethroning Mohammed Sanusi II visited Kaolack in Senegal. Upon his return, he was received by a tumultuous crowd during his endorsement as Caliph of Tijaniyya in Nigeria at Sokoto on Friday, March 12, 2021. Barely days exactly one year after he was deposed on March 9, 2020. It was a monumental public relations coup as can be seen in the attached photograph.

I was therefore not surprised after his recent meeting with the hierarchy of that sect in Kaduna the former monarch declared to the general public, “I have no intention of running for any political position in the country,” with that enunciation he continued, “If we have those, we trust who promise they will work for the betterment of the nation, then we can come together and help them.”

The former monarch spoke against the background of a muted public presentation of a compendium of 35 of his previous interventions packaged in 12 chapters spread over 509 pages.

But why Sokoto? And more recently Kaduna?

I do not know what President Buhari’s political exit strategy is in 2023. I can however discern that there is now a rival orbit of influence taking shape under the auspices of Sanusi among the Northern Muslim intelligentsia and indeed across Nigeria. Religion and politics are two sides of the same Arewa coin.

Perhaps, I am reading the tea leaves wrongly but who exactly are those political actors that Sanusi II trusts enough to “help”, those according to him “who promise they will work for the betterment of the nation”?

Lest we forget in Sokoto last year the new caliph was installed in the presence of Governors Aminu Waziri Tambuwal and Bello Matawalle of Zamfara including prominent clerics from Senegal, Algeria (where the founder of the sect Ahmad al Tijani was born in 1737), Morocco (where he died in 1815), Egypt, Mauritania, Ghana, Cameroon and Sudan among others including Kerala, India the hub of the Tijani sect in Asia. While the Sultan of Sokoto was noticably absent he was ably represented.

Meanwhile, in Kaduna Sanusi’s close friendship with Nasir el Rufai is an open secret. Governor el Rufai would write the 4-page Foreword of Sanusi’s, “For the Good of The Nation.”

Why did Ambassador Aminu Sanusi entrust his eldest son to the Irish nuns of St. Anne’s as he went about diplomatic shuttles across the globe on behalf of newly independent Nigeria?

Ordinarily, one would have expected Sanusi junior to have enrolled at the Sir Ahmadu Bello established elite breeding ground, the primary boarding Kaduna Capital School across the river instead.

Anyway, Sanusi senior’s grandfather, Abdullahi Bayero (1881-1953), an accomplished Islamic scholar, a scion of the Dabo ruling house and emir from 1926 to 1953 was not only a conferee of Commander of the British Empire (CBE) but an inductee of the Most Distinguished Order of Saint Michael and Saint George (OMG) who delicately aligned himself with the prevailing circumstances of his time.

Having come from a long line of aristocratic clerics traced to Ibrahim Dabo, head of the Fulbe clan of Sullubawa in Kano that was previously emir from 1819 to 1846. Bayero fully adapted to the dynamics of colonial power play.

Unfortunately, the current Caliph of Tijaniyya while on the throne was not that circumspect. His recently launched book is perhaps a redemption of sorts more so that he has resuscitated his former name – Sanusi Lamido Sanusi as emblazoned on the cover complete with his trademark bow-tie clearly marking a grand reentry into the arena of public debate.

The 14th Fulani Emir of Kano is the grandson of Bayero’s son, Mohammed Sanusi I that was emir from 1953 to 1963 and the first Nigerian caliph appointed by Sheikh Ibrahim Niasse (1900-1975) then the leader of the Tijaniyya order in West Africa still headquartered in Kaolack.

For the Dabos to have held sway in Kano now for 202 years and still counting under Aminu Ado Bayero, the 15th Fulani monarch, they must have perfected the art of being endlessly inventive and staying consistently relevant irrespective of epoch and circumstances they find themselves.

Sanusi Lamido Sanusi’s book is proof of that kind of tenacity.

With incisive topics from his writings spanning from 1999 to date, “For The Good Of The Nation” is a must read as Sanusi deftly navigates the reader through the fluidity of his thoughts, some progressive ideas, many banal ramblings and occasional grandstanding.

Obviously, it was long time in the works because the Introduction is dated May, 2012 was written by Prof. Pius Adesanmi who died in an air crash back in 2019.

Sanusi takes no prisoners and spares no one in his book. For instance, while condemning Muslim sour grapes over, “Obasanjo’s appointment of Northern Christians into his cabinet” he takes a swipe on, “retired Christian generals, from Takum to Zangon-Kataf, who find themselves overshadowed by more junior, but Muslim, generals in the North”

Elsewhere he traduces the South West in, “The Yoruba Factor and Area-Boy Politics”, x-rays Restructuring in 25 pages and retrospectively stands by the Catholic Bishop of Sokoto, “In Defence of Reverend Father Kukah” while exploring, “Values and Identity in the Muslim North”

My personal favorite is, “Islam, Christianity and Nigerian Politics: A Tribute to Thomas Paine (1737-1809)”

But more significantly, Sanusi was able to make a near accurate prognosis on the current crisis in the South East. In his take written more than twenty years ago entitled, “The Igbo Factor and The Reasonable Limits of Retribution” he maintains “The Northern and Yoruba bourgeoisie have conspired to keep the Igbo out of the scheme of things.

In the recent transition, when the Igbo solidly supported the PDP in the hope of an Ekwueme presidency, the North and the South West treated this as a Biafra agenda.”

Sanusi continues, “Our present political leaders have no sense of history. There is a new Igbo man, who was not born in 1966 that neither knows Nzeogwu nor Ojukwu. There are Igbo men on the street who were never Biafrans. They were born Nigerians, are Nigerians. They will soon decide to fight their own war, and may be find an honorable peace, than to remain in this contemptible state.”

Remarkably, Sanusi warned Nigeria was sitting on an Igbo time-bomb that is now detonating as far back as September, 1999 when he was still an Assistant General Manager at UBA, Lagos during a conference at Arewa House, Kaduna.

Sanusi Lamido Sanusi is therefore a man for all seasons albeit located between a rock and a hard place while oscillating between a bow-tie and the turban.

Since his deposition in 2020, he has not only skilfully reinvented himself but strategically positioned himself on the Nigerian chessboard as a major behind the scenes actor ahead of 2023 who seeks to epitomize William Graham Sumner’s dictum; “If you ever live in a country run by a committee, be on the committee.”

I certainly respect, eagerly watch and carefully under study Sanusi Lamido Sanusi despite not always agreeing with him.