Menu
Home Health HIV Self -Testing: It is a simple test that anyone can do – Expert
Health

HIV Self -Testing: It is a simple test that anyone can do – Expert 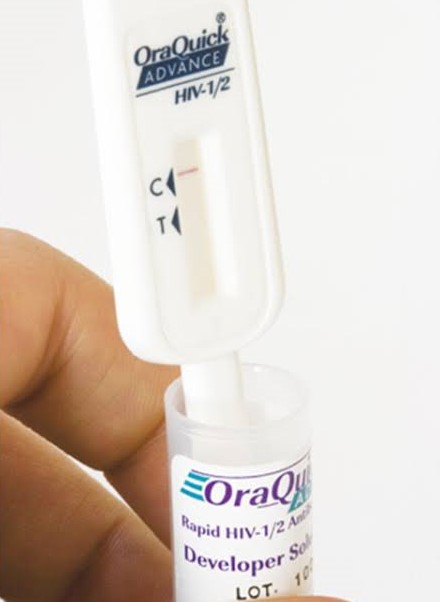 “It is a simple test that anyone can do, its quick and assured. The best part is that you can do it in the privacy of your room with no one looking over to know what your result will be”

What Nasir Saadat, a HIV counsellor and caregiver is talking about is called HIV Self – Testing. It is the emerging process by which an individual wanting to know his or her HIV status collects oral fluid or blood sample, performs HIV test, and interprets the results by him or herself privately.

Saadat who has been counselling and demonstrating how to use the HIV Self Testing kit, for some years now, however says using the kit correctly, and accurately is very critical to get a valid result.

“Yes, anyone using the kit must first read the leaflet of the manufacturer of the kit to understand first how to use it” because “failure to do so may lead to an invalid and inaccurate result” she told journalists during an Internews funded media training in Lagos on HIV Self – Testing as an evolving prevention approach in Nigeria.

According to Saadat, “if used correctly and accurately, the approach will play a substantial role in accelerating progress towards achieving the target set globally the UNAIDS (95:95:95 targets) by the end of 2030.

Demonstrating how the kit should be used, Saadat said the beauty of the approach is that it is easy to use, confidential and does not require blood sample, for the kits currently in use in Nigeria for now. “What you need is the swab from the gum of your teeth, make sure you collect enough of it, mind you I am not talking of your saliva”

She also said “it is important to look out for the expiry date on the kit, to ensure you do not have an invalid test”. Another thing she warned against is eating 30 minutes before the test. “This is to ensure that food particles are not included in your specimen”

She says the test should not last more than 15 to 20 minutes from beginning to its end. “After collecting the swab, you drop it into the long tube and follow the instructions of the manufacturers to its end. It is as simple as the pregnancy test most women use to find out if they are pregnant”

Unlike the pregnancy test however the HIV self – test is not final test. “You still have to go back to where you collected the kit or to the hospital to do the confirmatory test, it is that test done in a hospital or by professional health care workers that will say finally whether you are positive or negative”

Tobi Ademola – Kay is the HIV Testing Officer for the JHPIEGO/STAR project in Lagos. She says Saadat’s advices are very critical for an accurate HIV self – testing result. She also said care must be taken by anyone doing the test to ensure they do not have a big sore in the mouth at the time of doing the test.

“It can lead to a wrong result” she said.

Currently, Ademola – Kay says only 67% of people living with HIV in the country know their status, (UNAIDS, 2018). Among other reasons, this is so because “there is low HIV testing coverage among men, young people and key population”

More significant is the fact that “HIV case finding has worsened with the advent of COVID-19 outbreak”. She says it is to reverse the situation that some innovative strategies were introduced in Nigeria to ramp HIV testing particularly the number of youths who willingly elect to know their status.

According to her, the “innovative strategies are needed to address the huge gap in HIV case finding” especially with the advent of Covid – 19, “to rapidly increase uptake of HIV testing services especially among populations with low access and those at higher risk”

Unknown to most people she said “Covid – 19 currently rank higher than stigma as a barrier to HIV testing in Nigeria”. Other barriers include confidentiality of results, accessibility to health care facilities and time management and attitude of clinical staff.

In addressing the impact of Covid – 19 on HIV self – testing, the Nigerian government through its health partners like JHPIEGO/STAR have deployed both assisted and unassisted interventions.

To ensure that there is wide distribution of the test kits to all parts of the pilot states and sites, distribution has been deployed through primary and secondary methods across the various delivery channels.

The final method is through private sector delivery channels which are Patent Medicine Vendors, PMVs, Community Pharmacy and Laboratories.

So far, Ademola – Kay says the outcome particularly in Lagos state has been very encouraging. As a prevention mechanism she said HIV self – testing is highly beneficial to the individual, community and Country Response.

It is “available to key populations and hard-to-reach clients and can be bought over the counter, it provides privacy that allays confidentiality concerns and reducing stigmatization and discrimination”

She also said it is “easy of use with minimal bio-hazard waste generated, promotes partner testing and expands testing to partners of PLHIV and social networks of KPs”

Ademola – kay however said the approach is fraught with some behavioural and affordability challenges.

These are associated with “non or late disclosure of results, poor Knowledge and awareness among the general populace and relative high cost of HIVST kits in private sector space due to monopoly of product”

Already she said the Government of Nigeria working with her health sector partners is taking proactive steps to ensure that the challenges are removed.

As a result, she said effective counselling is being promoted across the system, to facilitate the collection of clients’ phone number and descriptive address, with their permission, to ensure appropriate follow up after the kit is collected.

Also, she said appropriate demand creation materials are being developed, for aggressive awareness creation and promote demand for HIV self – testing services by Nigerians, while qualified local organizations will be commissioned to increase sensitization and awareness across communities.

On the administrative side, she said government is working to ease registration and approval processes for more HIV Self – testing products to increase choice and drive down costs.

HIV prevention getting better with PrEP and Self Testing

Confessions of a Wailer