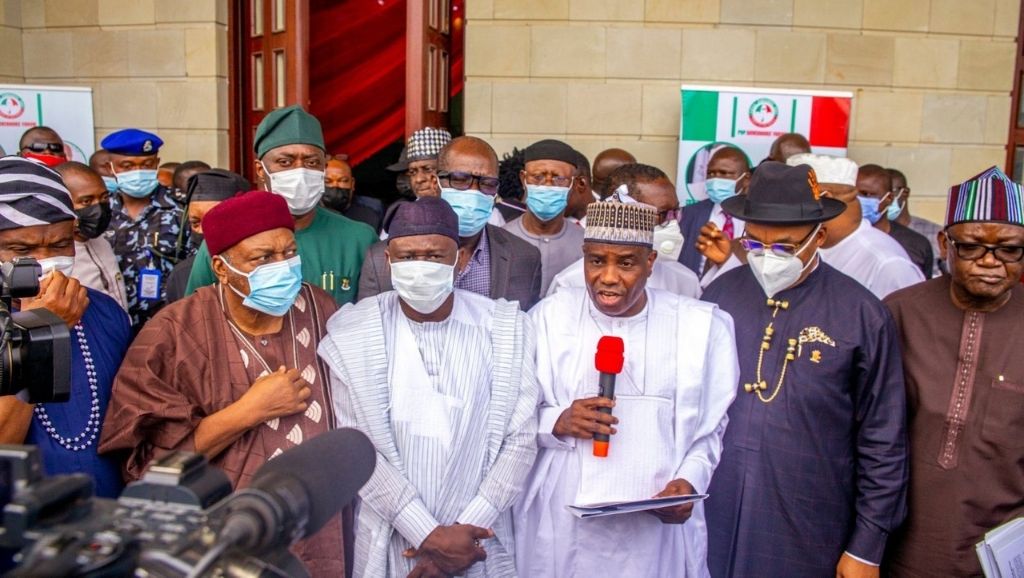 Governors under the banner of the Peoples Democratic Party have raised alarm on how revenue earning agencies of government are flouting constitutional stipulations on how they should be managed.

In a communique at the end of the routine meeting of the party’s Governors Forum, PDP – GF, in Uyo, Akwa Ibom state today, the Governors frowned at the situation where “the Central Bank of Nigeria, CBN, is operating as an independent government within a Government” adding “it is a pervasion of the autonomy of the Bank”

Even more worrisome to the PDP governors was “a situation where CBN creates money, decides how much of it to spend, on what to spend it on without any form of controls or supervision” this according to the governors “is patently subversive of our constitutional order”

In the view of the governors the CBN “has become not just a Leviathan, but also a father Christmas of sorts, dabbling into every sphere and scope of governmental activity, not just as a lender of last resort, but as a full executing agency of government”

The meeting further observed that the CBN has become such an octopus that it threatens State governments publicly, without decorum, about sanctions on any attempt to question its Modus operandi even as the bank has continued to struggle to halt the depreciation of the Naira..

The governors also expressed alarm at the hidden manner the Nigerian National Petroleum Corporation, NNPC, carries out its operations.

For instance, the meeting condemned “the recent NNPC’s decision not to make its statutory contributions to the Federation Account, thereby starving the States and Local Governments and indeed Nigerians of funds needed for employment, development and general wellbeing”

For the avoidance of doubts, the PDP governors emphasised that “under the Constitution, the NNPC is duty bound to make proceeds of sale or business of Petroleum available to the Federation Account which belongs to the three tiers of government, excluding reasonable and verified and verifiable cost of operations”

As a result, the meeting reasoned that the time had come for “the federating States … to have a say in the determination of operating costs” for all the agencies “to ensure transparency and accountability”

The agencies include Nigerian Ports Authority (NPA), Nigerian Maritime Administration and Safety Agency (NIMASA), Nigerian Communication Commission (NCC), Federal Inland Revenue Services, Customs and Excise and similar organisations that are statutorily required to make contributions into the Federation Account. The governors called on them to adhere strictly to constitutional provision on making contributions to the Federation Account.

“The meeting frowned at a situation where the NNPC decides in a totally discretionary and often whimsical manner, how much to spend, how to spend it and how much to remit to the Federation Account, contrary to the letters and even the spirit of the 1999 Constitution” the communique highlighted.

The PDP Governors further frowned at the rising and seemingly uncontrollable debt profile of Nigeria with over 80% of normal Appropriation spent on debt servicing.

“All the gains of the PDP Government under Chief Olusegun Obasanjo, GCFR, where Nigeria exited its foreign debt obligations has been destroyed” adding “borrowing for frivolous items such as funding the Nigerian Television Authority is scandalous”

They declared that “money should only be borrowed for productive purposes as Nigeria’s current debt of over N36 Trillion Naira is becoming clearly unsustainable relative to our earnings and GDP” pointing out that “the borrowing spree of the APC administration if unchecked, will certainly lead Nigeria into avoidable bankruptcy”

The meeting expressed support for the implementation of judicial and legislative autonomy in the Federation and States, in conformity with the extant provisions of the 1999 Constitution.

The PDP Governors further reviewed the emerging threats to democracy, constitutionalism and rule of law in the country and “cautioned the Federal Government to exercise power with restraint” noting that ”the need for law and order is paramount to secure our nation but mindless killings of innocent civilians should be avoided and is hereby condemned

The meeting examined the suspension of TWITTER from operating in Nigeria, and condemned the personalised reasons given for the action. “The mere ego of Mr President is not enough for such a drastic action that deprives millions of Nigerians from such an affordable means of expression and communication” hoping “that this is not a harbinger or early warning signs of descent into dictatorship”

In attendance at the meeting were:

You are indeed jokers to the highest order. It is now that you have realized that there are three tiers of Government and each one of them constituted a significant federating arrangement in Nigeria.