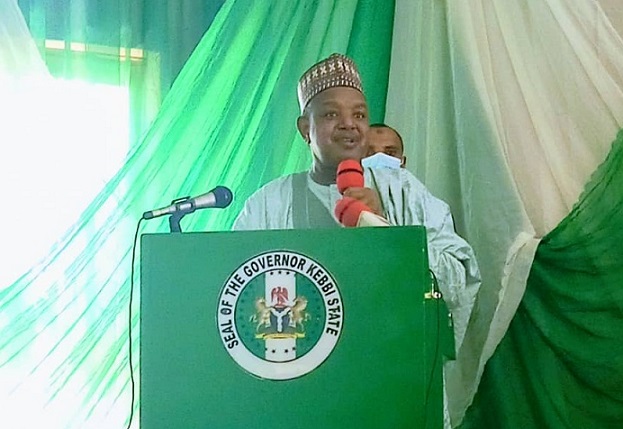 The Chairman Progressives Governors’ Forum and Kebbi State Governor, Senator Abubakar Atiku Bagudu, has sought for the incorporation of a role for the traditional rulership in the Nigerian Constitution.

This is just as he also mulled for the provision of more resources,as well as more investments in the north,in order for the region to be at par with the other parts of Nigeria .

Speaking in Birnin Kebbi, at the North West, Zonal Public Hearing on the proposed Constitutional Amendment ,organized by the House of Representatives Special Committee on the Review of the Constitution.

He recalled that, even before the amalgamation of the country in 1914, Nigerians accorded respect to the traditional institution.

He disclosed that, as one of the uniqueness of Nigeria, the nation is the 7th largest country in the world, yet, lagging behind in terms of resources allocation, saying ,” this is one of the crises points.”

Bagudu said: ” Constitutional changes will allow us to have more resources, to cater for the needs of our people and this is supposed to be the Constitutional bottom line.

” Fundamental to our challenges is to mobilize more resources, fill the development gaps , hence, provide an ideal Constitutional framework.”

He further lamented that, Sokoto, Kebbi and Zamfara States have abundant untapped resources and this ugly trend should be redressed .

He added ,” the Legislature should therefore bring this to the core and redress the imbalance, so that we can get more resources and develop like other parts of the country.”

Bagudu also averred that, the north should not be defined by a minority that are far away from the north’s core value systems, like the terror groups, insurgents and kidnappers, among others .

” We call on other well meaning Nigerians to reciprocate this and we are in support of the Constitution review.

” We hope at the end , it will reflect and do what is expected for the progress of our country ‘.
Bagudu reiterated their belief in Nigeria and will continue to support the orderly development of the nation, as well as do something commensurate with religion and conscience .

He had earlier commended the House of Representatives for deeming Kebbi to host the all-important excercise .

Speaking earlier, the Sultan of Sokoto, Alhaji Sa’ad Abubakar, described the exercise as an important national event .
He therefore advocated the use of Hijab by Muslim women, without restrictions and in total observance of the freedom of religion in the country.
He urged the participants to talk to themselves in the most honest and truthful manner , as well as voice out all their grievances about how they are , with a view to address them.

The monarch urged the people to” speak up with all honesty , without the fear of anybody, but, only the Almighty Allah.

” Look at the constitution and see if it Is good , if it can be amended or should be thrown away, in favour of a new one.”

He noted that, Leaders are not one hundred percent perfect. We all make mistakes as leaders and through you, we can correct these mistakes.”

Earlier, Adekoya Adesegun- Abdel-Majid, the Deputy Minority Whip, who is the Chairman of Binrin Kebbi Centre of the North West Geopolitical Zone of the committee, noted that it was no longer news that presently the nation was going through a period of unease and growing concerns across nation in terms of insecurity.

” This is also in addition to ethno – cultural agitations all of which might not have been unconnected with the inadequacies in our present National Constitution.

” These inadequacies seek urgent redress and attention lest we are all consumed by the effects of our failures to discuss our common and collective problems as a people.

“It is the need to address these deficiencies in our constitution that the National Assembly and in particular, the House of Representatives under the leadership of Hon. Femi Gbajabiamila decided to return to our people across the length and breath of Nigeria with a view to seeking your voices, contributions, participation, and inputs in the proposed alteration of the provisions of the constitution of the Federal Republic of Nigeria 1999 (as amended).

“By this process, a thoroughly debate conversation will engender a constitution that we can truly call our own,” he said.

Adesegun- Abdel-Majid added that it was for that purpose that the house of representatives decided to organise the gathering.

“For vast majority of Nigerians, equity is what we need for peace and sustainable development to be our portion in our dear country.

“The task of keeping Nigeria as one indivisible entity is sacrosanct and unequivocal”, he said.

Kano: MoPB to Formalize Biannual Interactive Session with CSOs and the Media