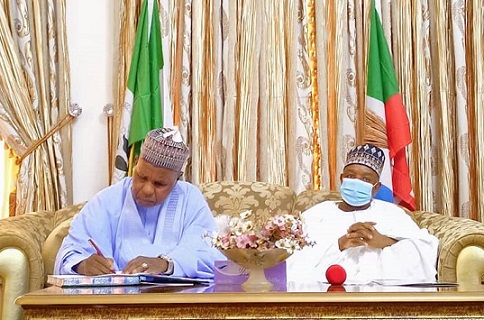 The governor spoke in Birnin Kebbi when he paid a condolence​ visit to Kebbi State Government on Sunday.

According to him, the tragic incidence​ had consumed the lives of over one hundred persons and in Nigeria, just like in other climes, tragedies of such disturbing magnitude call for national mourning and concerns.

“That is why we are here, on behalf of government and people of Katsina State, to express our deepest condolences and commiseration to the families of the victims, people and government of Kebbi State,” he said.

Masari​ expressed hope that, the deceased have had a good ending and (shahafah), as they died while pursuing their legitimate means of livelihoods.

The Governor further prayed the Almighty Allah to grant the deceased Aljannat Firdaus, speedy recovery of the injured ones, as well as give the bereaved families, people and government of Kebbi State, the fortitude to bear the irreparable losses.

“Since when the incident occurred, my brother and leader, Masari, has been following the developments on the search and rescue, and he capped this, with the visit, today.

“This is a remarkable show of love, concern and care and we will continue to​ cherish and appreciate our long-lasting bond of cordial relationship,”

updating the governor, Bagudu stated that, so far, 81 dead bodies had been recovered and buried according to Islamic rites, while 22 persons were rescued alive.

Efforts are still ongoing with the hope of recovering the remaining bodies of the victims.

Berhalter: It’ll be very difficult to keep Pulisic out of USMNT lineup against Honduras