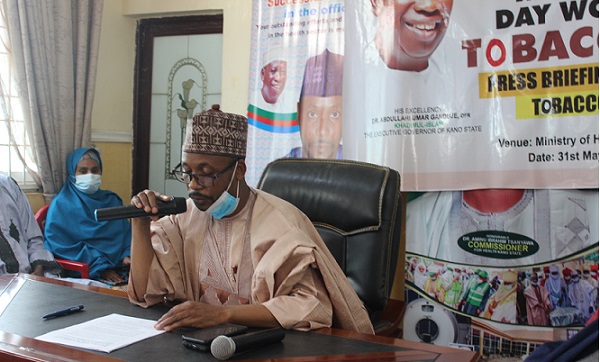 The commemoration of World No Tobacco Day (WNTD) started in 1987 to draw global attention to the tobacco epidemic and the preventable deaths and disease it causes.

The World Health Resolution Assembly WHA 42.19 calling for the celebration of WNTD every year on 31st May was passed in 1988.

Kano joins the rest of the world to commemorate the WNTD aimed at raising awareness on the harmful effects of tobacco (causes 7 million deaths annually) use including exposure to second hand smoke (causes 1.2 million deaths) – WHO, 2021, and to discourage the use of tobacco in any form or disguise.

Speaking at a press conference for the commemoration of WNTD in Kano held at Ministry of Health conference hall on Monday, the Hon. Commissioner of Health, Dr. Aminu Ibrahim Tsanyawa noted that government has been consistent in the implementation of all programs aimed at improving the lives of citizens.

He said: “Government has committed a lot of resources to the control of non-communicable diseases in the state such a hypertension, sickle cell disease, asthma, tobacco related lung disease such as lung cancers.”

“We are all aware of the multi-billion-naira state of the art cancer center being established by the government.

“The Ministry of Health has also doubled its effort in sensitizing the public on the dangers of tobacco smoking and its consequences,” he added.

Others are reduced risk of stroke to that of a nonsmoker 5 to 15 years after quitting in 5 years and decrease and shortness of breath between 1-9 months.

Adding that the covid-19 pandemic has led millions of tobacco users saying they want to quit.

This year, WHO targets at least 100 million people world-wide to be supported to quit tobacco by adopting various initiatives like the digital solutions.

Fielding questions from newsmen on the need to take desperate measures in curbing drug and tobacco sales and consumption in the state, Dr. Tsanyawa said a bill to establish drug control agency in Kano has passed second reading in the state house of assembly.

“I assure you very soon, we will have an agency that will work with other stakeholders to control drug abuse in the state,” he said.