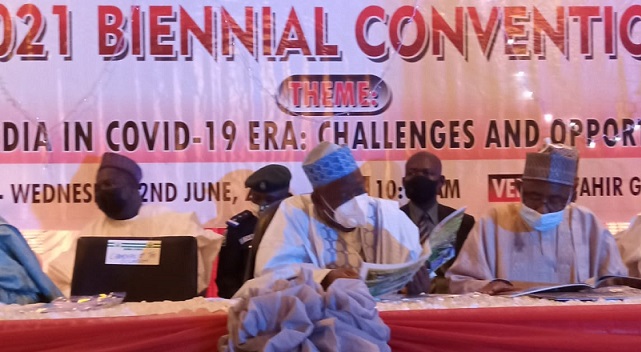 The governor’s spokesman, Abba Anwar in a statement, Monday said Ganduje described the event as an opportunity to look into national development as it relates to media practice.

He urges that, “It is very important at this time that we should use the media for the promotion of peace and stability and change the viewpoints that could alter public views and sentiment toward a more peaceful resolution of our multi-faceted current crises.”

Adding that, “If and only if we as a nation are interested in peace and harmony, we must reject hate propaganda machinery. In the main, this is a time Editors should be conflict-sensitive about our nation.”

He observed that, crossing of redlines by some media organisations in recent times has impacted on the nation’s unity, harmony and integration.

Urging that, “Our brave, collective pursuit in uniting this nation, underscores the fact that for as long as we have a common purpose, we will find no obstacle big enough to stop us from marching on. The media and particularly our gatekeepers have a role to play in this regard.”

While urging media to ensure looking into social responsibility aspect of their practice for national development, he maintains that, the call for freedom of the Press, observance of ethical standard must also be seen to be respected.

In his remarks, the President of NGE Mustapha Isa, appreciated the presence of the governor at the event, acknowledging that, Kano has been transformed into a more modern city-state.

He explained in clearer terms now fake news affects media credibility and development. He called on media practitioners to stick to ethical standard and also follow suit in using technology, as it is obtained presently.

Ma sha Allah
Good people with good heart Gov Ganduje you are blessed and is the kind person like you we need to rule Nigeria and we are happy to have you as a Governor of kano.