The Ghost of Ben Ekele 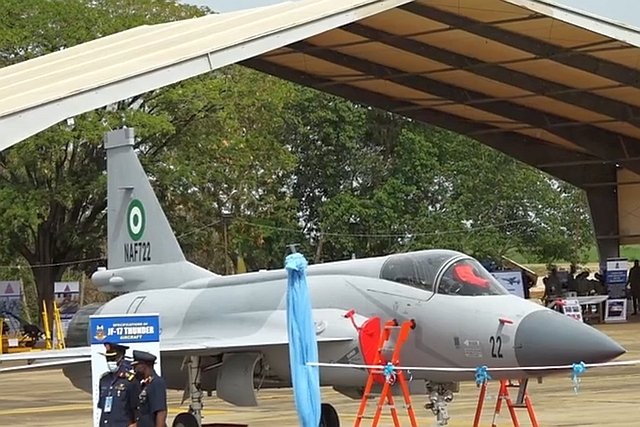 Thanks, but no thanks over the recent induction of three number Joint Fighter -17 Thunder multirole aircraft into national service. Dubbed NAF 722, NAF 723 and NAF 724 these Chinese licenced single engine air-to-air and ground-attack fighters were rolled out of the Pakistan Aeronautical Complex (PAC) located at Kamra in the historical Punjab region that stretches into present-day India.

While as a patriot, I heartily congratulate the officers and men of the Nigerian Air Force (NAF) and indeed the Commander in Chief on this latest acquisition, I do not know whether to laugh or cry. I shall however do neither.

Instead, there is need to engage in a national sober reflection.

PAC was established in 1971. It is an offshoot of the Pakistani defence industry setup in 1951.

Ours in Kaduna came into operations in 1964 – a mere 13 years later but the same year with that of Brazil. Yet here we are!

On April 22, 1989 the NAF Air Bettle aircraft was commissioned. 60 were eventually produced in technical partnership with Dornier right here in Nigeria at Kaduna. Those RV-6 aircraft were German licenced reminiscent of indomitable Mercedes-Benz 200; sturdy, rugged and functional.

It is in times like these one reflects upon the legendary Wing Commander Ben Ekele (1949-1985). This maverick now of blessed memory was reputed to be NAF’s most outstanding test pilot on all potential acquisitions during his time.

Though his brilliant flying career was terminated barely 2 years before the Air Bettle went operational, the point is on the unlimited capacity of the typical Nigerian. Our people are incredibly talented. If we can properly get our act together, we do not need to import any fighter aircraft from Punjab with scarce Foreign Exchange.

Ekele was winged as a pilot at 22, by the time he was 28 he had graduated the first generation of Nigerian trained MiG-21 fighter pilots from the same Makurdi base the JF-17s were inducted. Significantly, due to his proficiency on Aircraft Acquisition Evaluation trips he was able to detect the Soviet Union was short changing Nigeria with Second World War munitions instead of the modern ones we paid for.

How effective will the JF-17s and indeed the expected Tucanos be in solving Nigeria’s myriad insecurity problems? Not much as these aircraft are designed for symetrical warfare. They cannot distinguish between kidnappers and those held hostage. Banditry and insurgency are asymmetrical warfare best fought with drones and from helicopters.

Interestingly, Ekele alongside Wing Commander Adama Chema Sakaba (1947-1986), the first NAF officer to be trained in Guided Missile Technology seriously advised against the deployment of NAF assets in coup plots because such cannot distinguish between plotters and loyalists.

Unfortunately, Ekele and Sakaba both very puritanical and highly moralistic officers were executed by firing squad for “concealment” of the very plot they advised against on March 5, 1986.

Today, Brazil produces its own Tucanos and for export. Even the Pucaras the Argentine Air Force used in trumping the British at Falkland Islands back in 1984 were produced by the Brazilians.

Truth is there can be no sustainable military-industrial complex in our nation without an Iron and Steel self sufficiency.

President Shehu Shagari naively thought he could lay the foundation of industrializing Nigeria by establishing Ajaokuta. He was badly mistaken that one day Nigerians would manufacture their own cars and build their ships. He didn’t factor external subterfuge and internal sabotage. The rest as they say is now history. Nigeria is still import dependent on steel products.

What happened to our fledging aircraft industry? Are there diligent officers like Ekele in service today?

The Air Bettle project was a source of national pride. To own its Dornier printed sticker was a rare privilege. Up to the mid 1990s its sound dominated Kaduna skies. Back then we used to debate whether or not that aircraft’s engine was the same with a Volkswagen Bettle’s.

Those were the days my friends!

One Catholic Priest Killed, Another Kidnapped by Gunmen in Katsina