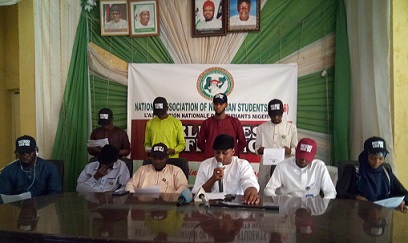 The National Association of Nigerian Students (NANS) says the transformation of students’ union to political groups by politicians is against the discipline of ALUTA that defines students’ interest.

Speaking to newsmen at the conference hall of the Kano Council, Nigeria Union of Journalists on Wednesday, NANS National Vice President, Comrade Yazeed Tanko Muhammad said it is of utmost importance for him to rise in times like this to oppose what has come to characterize the students’ movement in Nigeria.

“I therefore call on politicians to stop converting students’ umbrellas into an avenue for their political benefits.

“Our dear comrades should be resuscitated to their originality as best known in protecting the rights and interest of Nigerian students.”

“Students unions are expected to serve students and represent their interest to promote discipline, orderliness and oneness among students and school authorities on issues affecting them,” he articulates

The NANS National Vice President also affirmed Comrade Hamza Musa Uba, as newly appointed caretaker of National Association of Kano State Students’ (NAKSS) National body and urged him to work selflessly and efficiently towards the development of the students’ union.

It is of paramount importance for students that cause unnecessary alarm and hate speech to understand they are not doing good to their future and that of Kano State Students, he cautioned.

He calls on those claiming an authorized position on the leadership tussle of NAKSS to disassociate themselves from that perception stating that the dissolution was based on the provisions of the constitution that:

The dissolved president is no longer a student in any tertiary institution in Nigeria and diaspora and he is using the association as a source of income.

Comrade Yazeed Tanko Muhammad appreciates the efforts of Kano State Government in rescuing the integrity of students and restoring the image of NAKSS National body.

Fielding questions from journalists on why the union was silent before now on the issue and who are the politicians using the student body for selfish purposes?

The NANS National Vice President said NANS was consulting with stakeholders to consolidate issues before reaching the present confrontation stage.

On politician, “We are in private talks with the politicians, if they refuse to adhere to our plea, we will go public with their names,” he said.

I will Concentrate on Marriage, Child issues – Muhammadu Sanusi 11