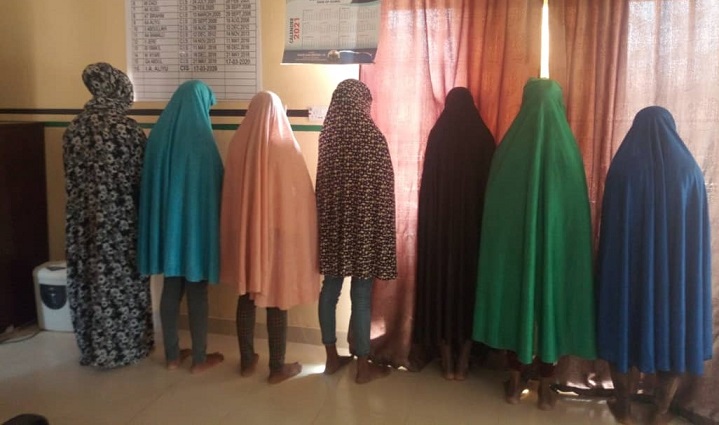 Presenting the apprehended victims, the Jigawa State Controller Nigerian Immigration Service Ismaila Abba Aliyu said, the arrest was made by Operation Salam along Kazaure Babura area of the state.

He said the suspected victims who has no valid travelling document confessed that they were on their way to Libiya for possible travelling to Europe.

He added that, the victims who were all female between the age of 16-27 came from different states including: Lagos, Kwara, Imo and Ogun state, while their agents arranged their journey from Kano state.

The Comptroller revealed that, no any incriminated iteams or substances were found in their luggages, however, investigation has confirmed that, the agent of the suspected victims is somewhere in Niger Republic and planned to convey them to Libiya through deserts.

Mr Ismaila Abba added that, when investigations are completed, the victims would be handed over to National Agency for Prohibition of Trafficking in Person (NAPTIP).

The State comptroller advised parents to always desist from been deceived of a travelling abroad for greener posture, maintaining that their mother country is far better than what they assumed to get abroad in an indecent manner.

NASU Condemns Decision to Reduce Salaries of Civil Servants, Says it is Insensitive, Provocative and Inciting