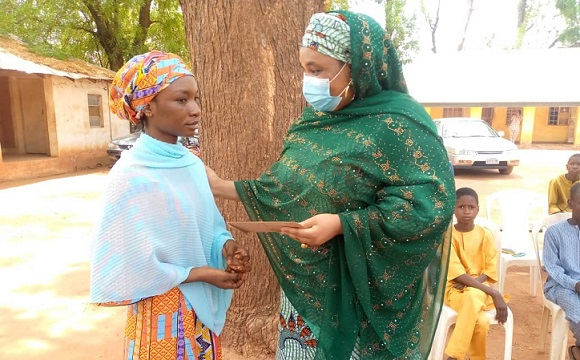 Wife of the Kebbi State Governor, Dr. Zainab Shinkafi Bagudu has donated cash and food items to the families of journalists who died in active service.

Bagudu who made the donations during the 7th edition of the Family Support Program for the families of deceased members of the State Chapter of the Nigerian Union of Journalists (NUJ), Kebbi state council, explained that, she will continue to support the less privileges in the society.

Dr. Zainab Bagudu, was represented by the Special Adviser to the Governor on Women and Social Development, Hon. Zahrau Wali

She also assured the Union her continuous support in making sure that the families of the deceased members were relieved of their burden, and urged NUJ to liaise with High Level Women Advocates (HILWA) to support the education of the deceased children.

Speaking earlier, Kebbi state Commissioner for Information and Culture, Barrister Rakiya Tanko Ayuba appealed for more support to the healthcare and education of families of deceased journalists in the state.

The Commissioner who was represented by the Permanent Secretary, of the ministry, Alhaji Garba Hamisu said that some of the orphaned families are facing serious challenges in health and education.

He described the gesture as a timely initiative worthy of emulation, adding that donating the foodstuff to the family members of the deceased will boost the cordial relationship among members of the pen profession.

Earlier In his welcome address, the State Chairman, Nigerian Union of Journalists (NUJ), Comrade Aliyu Jajirma said, this is the seventh edition of the Family Support Program to remember families their late colleagues and called for its sustenance.

He explained that 18 families of the late members benefited from this year’s donation package and commended the State Government, the First Lady, Dr. Zainab Shinkafi Bagudu, and other well-meaning individuals for their support.