Save FCE (T) Bichi from Falling 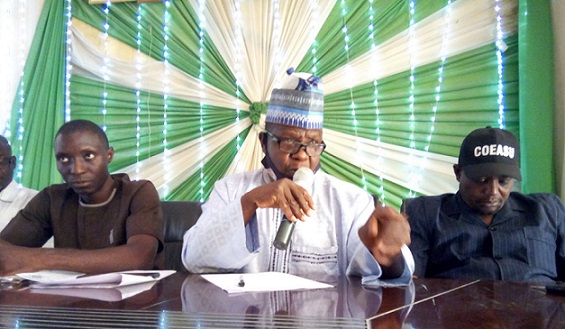 Since inception in 1987, FCE (T) Bichi boasts of a heritage of academic excellence which has been built and sustained over the years. As part of its history, the College was ranked as the overall best National Certificate in Education (NCE)-awarding institution in Nigeria.

Today, the over 30 years legacy of academic excellence is being truncated by the current Management of the College; no thanks to the leadership style of the College Provost, Professor Bashir Muhammad Fagge.

Speaking to newsmen, Tuesday, at NUJ Secretariate, Kano, he says: “I want you to see it as an opportunity to draw the attention of other stakeholders in the Nigerian education project and the world at large to the deplorable state of teacher education in Nigeria, using our own dear College, the Federal College of Education (Technical) Bichi as a reference point.”

Yunusa says: “It is in a bid to salvage the precarious situations currently facing our dear College that we, the academic staff of Federal College of Education (Technical) Bichi, under the auspices of the COEASU, FCE (T) Bichi Chapter, conveyed this Press Conference to let the world know the plight of our great College and to serve as a veritable platform for rallying the support of relevant stakeholders.

“Today at FCE (T), teaching and learning is taking place under the most unbearable conditions. Academic infrastructures are dilapidating due to lack of maintenance; laboratories, workshops and studios are not functioning optimally due to lack of equipment and consumables; insecurity and lawlessness is alarming due to the complacency of the current Management of the College

“Staff morale is at a low level, due to non-payment of staff allowances and other statutory entitlements, among other pressing issues.”

He also says the college is yet to issue college graduands their Teachers’ Registration Council (TRCN) certificate and National Certificate in Education (NCE) certificates for 2014/2015 and 2015/2016 sessions.

“The failure to issue TRCN certificates to our former students may be viewed by the general public as a corporate fraud, considering the fact that they had paid for the processing of the certificates in advance as part of their NCE III school fees while in college.

“The non-payment of security personnel for about seven months has further threatened the security of lives and properties of the institutions. This situation has culminated in serious theft in the student’s hostels.”

The Union Chairman says: “It may interest you to know that as at August 2017, the College Management had incurred a debt stock amounting to about 80 Million Naira, being the cumulative sum of deductions from staff salaries that were not remitted to the College’s Staff Cooperative Society, before a part-payment of 55 Million was made by the College after much pressure from stakeholders, leaving a balance of about 25 Million Naira which is yet to be settled up till date.

“As partners in progress, we seek for your kind intervention to draw the attention of the government and relevant stakeholders in the colleges of education sub-sector to press on our current management to address the aforementioned issues so as to improve the quality of academic standard and return the institution to its former status.”

He says the Union has commenced a one-week warning strike and will not succumb to the intimidation of ‘No work, no pay’ by the college management until their demands are met.

The various staff Unions who are trying to run down the Administration of Professor BASHIR at FCTE Bichi are not sincere about the issues they are raising.
Most of the issues being raised involved funding from Federal Government and if the fundings are not forthcoming,what do they expect the Provost to do .
They deliberately refused to mention they giant strides achieved by the College Management and the past Council In terms of the construction of the permanent site and the outreach stations almost 30 years after the land was granted to the College by the Kano State Government.
The atmosphere in the College has been peaceful since Professor Bashir took over as Provost and most of the Union Members are not happy about this because he refused to be intimidated by their actions.
FCET is one of the most developed College of Education in the Country and I even foresee a situation where it may be converted to a Technical University in the near future.
I believe this operation pull down the Provost is being done now because the FGN Visitation panel will soon visit the College and a new Council for the College has just been appointed by the FGN and the objectives of the Union is to paint the Administration of Professor in bad light and they will not succeed In Sha Allahu.
Most of the Members of the Union are Muslims and they should remember that whoever try to pull down is Fellow Muslim Brother in an unjustly manner will likely meet the wrought of the Almighty Allah.
Finally,power belong to the Almighty Allah and until HE decide the end of Professor Bashir,no amount of propangada will remove him In Sha Allahu.