As Zulum gets report, committee suggests new board to reform, regulate almajiri system 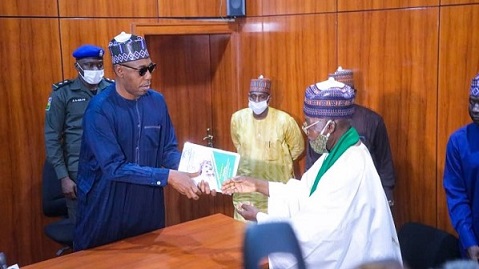 Borno State Governor, Professor Babagana Umara Zulum on Tuesday received a 76-page report which recommended the establishment of Tsangaya Education Board that should coordinate reforms and regulate the Almajiri system of education (called Tsangaya) in the state.

The report was presented to Governor Zulum on Tuesday in Maiduguri.

Zulum had in November, 2020 set up a reform committee with the mandate to come up with an action plan that can be applied to end street begging and abuse of children through almajiri system, called Sangaya in Borno.

The committee which had members from all Islamic denominations, was chaired by Khalifa Aliyu Ahmad Abulfatahi.

After series of deliberations that involved public hearings and intellectual submissions by diverse stakeholders, the committee came up with its report.

Presenting the report, Sheikh Abulfatahi, said the regulatory board recommended, should be responsible for implementing far reaching recommendations of the committee which would include key government policies.

Receiving the report, Governor Zulum expressed appreciation to the committee for their thorough and outstanding work.

The Governor assured that the report will be studied thoroughly and appropriate measures would be put in place in accordance with the committee’s recommendations.

Zulum suggested the possibility on leveraging the Federal Government’s Vocational Education Framework, by collaborating with the National Board For Technical Education in ways that will align with his administration’s ongoing efforts of streamlining formal and informal education to enable eligible graduates of the Tsangaya system qualify for access to higher educational institutions.